Max Siegel At ESPN And On "NASCAR Now" 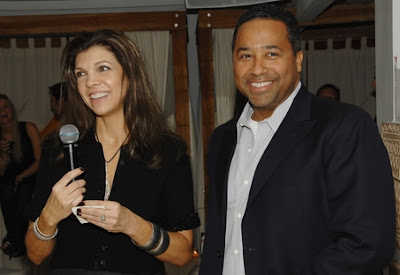 Wednesday has been a day that the NASCAR Now TV series on ESPN2 has been trying to tame. A little light on news, a little light on viewers and currently seeking an identity, the network may have hit on a nice solution in the form of an in-studio interview.

Max Siegel, the President of Global Operations at DEI, was in the ESPN2 studio and sat down with Ryan Burr. The setting and the interview had more of a general entertainment feel to it, as Burr opened the door to issues outside of NASCAR.

The fact that Burr was comfortable in this setting was clear. Gone was the nervous energy he gives off when he is put in the position of talking to a driver or crew chief about racing issues. This was a solid person-to-person conversation that perhaps should have been spread over two program segments.

Earlier in the show, Brad Daugherty had stopped by via satellite. Alone with Burr, Daugherty just does not fill a role that makes sense. Instead of responding to the on-going conversation as he does on NASCAR Countdown, Daugherty when alone speaks in general terms about selected NASCAR issues and then is gone.

With his recent feature on Petty Racing, and his strong work on the Monday NASCAR Now roundtable, Daugherty needs to be put in roles that make sense. Perhaps, responding to the Siegel interview later in the show would have been better for him.

While Burr covered a lot of ground in the time he had with Siegel, it would have been nice to continue that conversation simply because of the high-profile issues that Siegel addressed. This interesting man has a very different take on NASCAR, and a very diverse background. It made for great conversation.

Burr asked Siegel about the fact that motocross star James "Bubba" Stewart had been his recent guest at a NASCAR race. Siegel confirmed and then expanded on the fact that Stewart is nearing the end of his two-wheel career. Siegel hinted strongly that DEI would like to help him start a four-wheel project as the next chapter.

Hearing a powerful black NASCAR executive talk about a black racing champion and the DEI desire to lure him over to NASCAR was certainly a fascinating TV experience. Burr did a great job of following-up on these points, and it seemed that Siegel very much liked the interview.

It was a nice touch at the end with Burr and Siegel shaking hands on-camera after a full segment of information on everything from relations with Junior to the most difficult challenge Siegel has faced at DEI.

Perhaps, NASCAR Now might consider making this type of one-on-one interview a regular feature. As a switch from the normal news-driven interviews that revolve around one topic, this "bigger picture" interview would be great for a wide variety of personalities from Roger Penske to Mike Helton. Taking a moment to talk about things other than racing can lead to some very interesting conversations. This one was outstanding.

The Daly Planet welcomes comments from readers. Simply click on the COMMENTS button below and follow the easy instructions. Thanks again for stopping by.
Posted by Daly Planet Editor at 8:00 PM 7 comments: 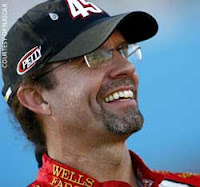 Loyal viewers of the SPEED program Tradin' Paint were tuning-in hoping to see a "re-match" of one of the most popular shows from this past season.

Kyle Petty was squaring-off with the one and only Bob Pockrass, the veteran NASCAR writer from the scenedaily.com website. Last season, Petty absolutely blew his stack at some of the comments and views of Pockrass. That memorable moment was captured in this column from 2007.

Host John Roberts has worked hard to make this little thirty minute show an engaging and balanced program. This season, Roberts has been placed in the middle of the three-person panel. How this has affected the conversation is not yet quite clear.

While the enjoyable and charming Liz Clarke from the Washington Post was the first guest at Daytona, she had a nice clean slate to begin the season. There was no such luck for Pockrass. After some early agreement on items in the news, things got interesting.

Robby Gordon sparked the discussion that wound-up with Petty trying to say that teams caught with violations before getting on the track should not be penalized points, just fined. Pockrass responded that the inspectors would be working all day long because everyone would basically try to cheat. That did not sit well with Petty.

This TV series is interesting because this is a side of Petty that is not on display when he is driving, or on the TNT broadcasts as an analyst in the booth. With the incredible personal saga of Petty, and his deep family roots in NASCAR, it is quite remarkable that he would take the time to duke-it-out with a different journalist every race week.

Sometimes, the chemistry is great between Petty and the media guest, especially if that guest happens to be from the television side of the NASCAR world. This show, however, works best when the opinions are very different and both sides get a chance to state their case and let the viewers decide.

Petty said he is ready for a Toyota to win in Las Vegas. Pockrass said he thought the COT worked "great" at Daytona. Both men agreed that the Nationwide Series is in sponsor trouble. Those were just some of the interesting items this week.

With just a little work, this show would be able to re-air during the week for viewers who continually miss it during the weekend. Monday night before or after the new This Week In NASCAR would be interesting. Aired before the show, it might give the TWIN guys something to talk about as well.

As this series progresses, we will try to give the media guests in advance, so viewers can know who will be on the show. There are many colorful characters on both the print and TV sides of the NASCAR media world. That should guarantee that there will be no shortage of memorable guests this season on Tradin' Paint.

The Daly Planet welcomes comments from readers. Simply click on the COMMENTS button below and follow the easy instructions. Thanks again for stopping by.
Posted by Daly Planet Editor at 5:47 PM 9 comments:

Certainly, that is an interesting group assembled in Homestead to unveil the merger between Champ Car and Indy Racing League.

If you feel that you can put your comment in the form of a TV-related opinion, you can do it below by clicking on the COMMENTS button.

This is a very interesting time, because this united series is the only competition to NASCAR in terms of oval racing in North America. One never knows what announcements might come out of this moment in time.
Posted by Daly Planet Editor at 12:29 PM 28 comments: