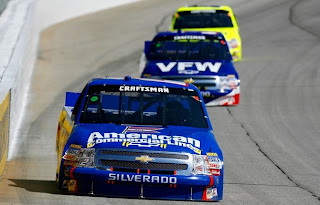 The Daly Planet welcomes comments from readers. Just click on the COMMENTS button below and follow the easy instructions. The rules for posting are located on the right side of the main page. Thanks for taking the time to stop by.
Posted by Daly Planet Editor at 12:24 PM 10 comments:

Ed Hinton And Marty Smith Finally Get Their Chance 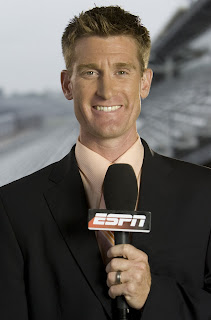 There is a new post up about the Monday NASCAR Now program, please click on the TDP logo at the top of the page.

Rarely has there been a NASCAR TV controversy brewing even before the first engines are started at Daytona.

Normally, SPEED puts on a January review show of the preseason testing and adds-in some interviews with various drivers and crew chiefs. All in all, it's usually nicely done but pretty boring.

This year, however, things have changed. The economic chaos has turned all three of NASCAR's national touring series into complete disasters. There is no other word to describe this situation.

Tuning into SPEED for both Preseason Thunder and Trackside did nothing to help fans get a handle on what had happened to their sport.

SPEED opted to hold the party line and present factual interviews with drivers that stayed away from the on-going problems. The SPEED/Fox announcers appearing on-camera kept things upbeat and positive. It was their choice and it was a very bad mistake.

Monday, it will be ESPN's opportunity to venture into this rapidly changing landscape and show TV viewers how the network will handle the two weeks prior to the Daytona 500.

It will be Marty Smith and Ed Hinton that join host Allen Bestwick for the first Monday roundtable show of the season. Smith has been with ESPN since the new TV contract first started. He paid his on-air dues in 2007 when he spent a full year dealing with the original NASCAR Now host Erik Kuselias.

Hinton joined ESPN last season and immediately provided a breath of fresh air with his unique style. Both Smith and Hinton transition between Internet reporting and TV appearances with little problem. Having them both together as the first NASCAR on ESPN "faces" that viewers will see this season is an interesting selection.

It will be Bestwick's challenge to either follow the style of SPEED and toe the party line or let Smith and Hinton talk openly about what is really going-on. How the sanctioning body, the teams and the tracks are handling this unique and challenging situation should make for good conversation.

Joining this pair will be Boris Said as the third panelist. Again, an interesting selection by ESPN. Last year, when TDP questioned why Said was on this program series, he responded directly and pointed out his NASCAR connections that included extensive testing and behind-the-scenes coaching of other drivers.

This year, with testing banned and the fields slim, it should be interesting to learn if Said will make more Sprint Cup Series starts. He is currently (click here) listed as the driver of the #60 Mark Simo Ford for Daytona Speedweeks.

Bestwick developed this one-hour Monday show for ESPN2 single-handedly and his hard work showed by the end of the season. Various guests came and went with Bestwick easily adjusting to whatever hand he was dealt each week.

This first Monday show should be a big challenge in several ways. People are currently deciding what and how to prioritize their lives for 2009 in this economic mess. As we all know, when things get tough a new reality sets-in and we all view the world very differently. Our priorities are rapidly changing and it is not by choice.

Since SPEED declined to enter into a realistic discussion, ESPN has the opportunity to open the door and start a conversation with the fans that may be critical to getting NASCAR through this economic crunch.

Getting fans to the tracks, getting viewers to the TV sets and keeping the NASCAR exposure level high during 2009 is going to be a huge challenge. Most fans consume NASCAR through the TV and the Internet.

Between NASCAR Now, ESPN-owned Jayski.com and the NASCAR portion of ESPN.com, the entire ESPN company is going to play a role in this effort from the start.

This first NASCAR Now airs originally on Monday at 5PM Eastern Time and re-airs at 1AM, or 10PM Pacific. We look forward to your comments on this program.

The Daly Planet welcomes comments from readers. Just click on the COMMENTS button below and follow the easy instructions. The rules for posting are located on the right side of the main page. Thanks for taking the time to stop by.
Posted by Daly Planet Editor at 10:30 AM 26 comments: