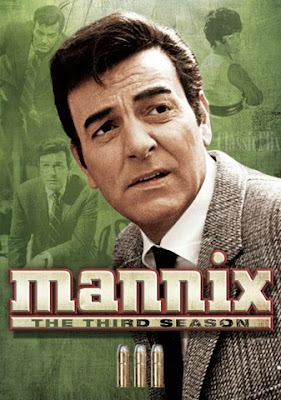 Joseph R. "Joe" Mannix worked the Los Angeles beat as a private detective in the 1970's. TV viewers loved the fact that he was just a regular guy. He was of Armenian heritage and fought in the U.S. Army during the Korean War. He was hard to impress, tough as nails and loved to mix it up with the bad guys.

This week, the big news was a dust-up in the garage area after the Saturday truck series race. On Sunday, the track was going to be slippery and the weather was going to be very hot. Tempers had the potential to boil.

Before the race, Chris Myers hosted a rather rowdy pre-race show featuring Jeff Hammond and Darrell Waltrip. When Waltrip gets fired-up he stays fired-up. Myers directed some traffic and Hammond made some good points. But Waltrip was the show.

Waltrip got "Revved Up" about those who have passion for the sport. Richard Childress was his example although he actually included Kyle Busch in the same rant. His point was that real feelings and emotions still had a place in a sport now dominated by polite drivers with marketing agendas.

Kyle Busch appeared with Matt Yocum and repeated the content from an earlier interview with Wendy Venturini on SPEED. Polite answers to all the questions about the incident, confirming he did not participate and was the victim. In both interviews, Busch made a point to remove his sunglasses so TV viewers could see he did not have a black eye as reported earlier.

The FOX coverage of a track like Kansas starts strong and then hits a groove that many know all too well. The cars are strung out, there is little real racing and rarely is a caution flag caused by an accident. In this event there were several cautions for debris like water bottles and trash on the track.

The race quickly settled down into what was destined to become a gas mileage race. Larry McReynolds was great in keeping viewers up to speed on strategies. Waltrip was not in that loop and just observed.

FOX followed the usual script of hyper-tight coverage with two or three cars on the screen. Replays were again used for every item being discussed, including passes under green that were missed due to poor coverage. FOX has lived on replays this season.

The pit reporters worked well but were not used down the stretch very well. Final fuel stops were called, but the best team of pit reporters on TV was not allowed to offer strategy updates or opinions. It was a tough way to close out the season.

FOX ran one split-screen late, sped up the ticker a bit and tried to use multiple video boxes at critical times to show multiple races. The weather stayed good, the suspense at the end was over fuel and the finish was a bit anti-climactic.

This post is used to allow you to offer your opinion on the FOX production of this race. To add your comments, just click on the comments button below. This is a family-friendly website, please keep that in mind when posting. Thank you for taking the time to stop by The Daly Planet.