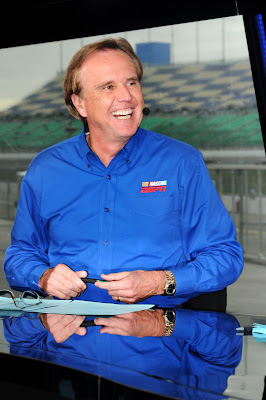 This week NASCAR is on the West Coast, so both the pre-race show and the live event coverage are on ESPN. It's 2PM ET for NASCAR Countdown and 3PM for the race.

Allen Bestwick starts the day from the Infield Pit Studio with Brad Daugherty and Rusty Wallace. Danica Patrick was the story in the Saturday Nationwide Series race, running strong until getting turned on the backstretch in her first NASCAR payback situation. It should be interesting to see if this makes the Sprint Cup Series pre-race show.

ESPN has been on the Kyle Busch vs. David Reutimann bandwagon all week long. At the Fontana track, Busch has been giving the media additional soundbites that should allow ESPN to make the issue a key pre-race topic.

Chasers vs. racers is again at the forefront as tempers are tight, sponsorship money is scarce and there are lots of teams that need a good performance and some TV time. They dynamic of racers not giving Chasers an inch on the track is relatively new and should wind-up being a story in the race coverage.

Marty Reid is calling the race with Dale Jarrett and Andy Petree in the TV booth. This is the first event since Reid's interview on Yahoo! Sports. Reid said blogs like TDP are basically full of like-minded people who gang up on those who disagree.

He said blogs don't provide constructive criticism, ESPN shows the best battles for position on the track and that drivers are targeted for coverage because they are important, not because there is some sort of TV script. Click here for the interview.

Dr. Jerry Punch, Jamie Little, Dave Burns and Vince Welch are going to cover pit road. Punch has raised the level of reporting from this crew and quickly made the performance of the pit reporters a non-issue. This change has been drastic from the antagonistic and often adversarial relationship ESPN had with the drivers for the past several seasons.

Tim Brewer is continuing to labor in the Tech Garage. There is almost nothing new Brewer can add after fans have watched coverage on FOX, TNT and ESPN since February. It should be interesting to see if ESPN makes the decision to return the Tech Garage for 2011.

The Auto Club Speedway is full of seams in the pavement that control the racing and affect the cars. Goodyear was dealing with a tearing problem in some tires that will hopefully be fixed prior to the event. Speeds at Fontana are far too great for tire problems to happen.

TV coverage from ESPN continues to be a wideshot with the camera then zooming into a small pack of two or three cars. On a track like Fontana, this causes continual frustration for the viewer. ESPN just cannot sit still and let the racing on the track speak for itself. Keep your eyes out for the number of times tight camera shots cause passing or incidents to be missed on TV.

This is a critical telecast today. NASCAR starts later than the early NFL game and is going to have to draw viewers away from those games already in progress. The race also runs into the second NFL game and will need to keep those fans glued to NASCAR until the checkers. It's going to be a big challenge with the nature of racing at Fontana.

As always, we invite your comment on the ESPN coverage of the Sprint Cup Series race from Auto Club Speedway. To add your TV-related opinion, just click on the comments button below. This is a family-friendly website, please keep that in mind when posting. Thanks for taking the time to stop by The Daly Planet.
Posted by Daly Planet Editor at 11:30 AM 374 comments: