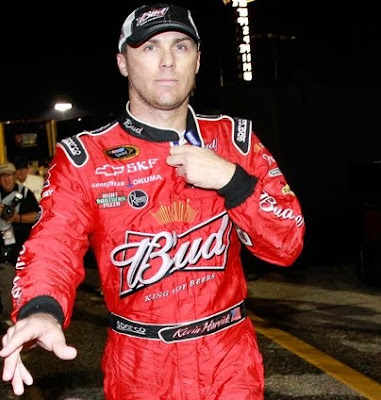 It's overcast at Dover with a 50% chance of rain. After a hard crash shook-up teams and crews on Saturday, the Sprint Cup Series races on one of the fastest mile tracks on the circuit.

Clint Bowyer got turned on his side and almost rolled it into the inside wall on the final laps. A rear spring from his car struck one of his pit crew members. It gashed his leg, chipped a bone and put him in the hospital overnight. Dover is one of the most dangerous tracks on the circuit.

The NASCAR on FOX trio of Darrell Waltrip, Chris Myers and Jeff Hammond appeared live during SPEED's RaceDay show. They were inside the Hollywood Hotel, so it looks like there will be no outdoor pre-race set this week. Rain is the likely reason.

Two items. First, veteran NASCAR reporter Mike Mulhern passed along that he heard Waltrip was pushing FOX to bring Micheal Waltrip into the FOX booth and move Larry McReynolds out. Secondly, Jeff Hammond joined Twitter and it should be interesting to see how he interacts with fans during the live race.

The new SPEED and FOX executives have fully enabled Waltrip as the star of NASCAR TV. Love him or hate him, Waltrip has four more seasons at FOX and SPEED and the contract is signed. After his failure to describe Kyle Busch's actions last week vs. Kevin Harvick, it should be interesting to hear Waltrip's comments in the pre-race.

Mike Joy sat back last week and the long periods of silence were a commentary on just how awkward these FOX telecasts have become. Despite his best efforts to communicate what is going on in the race, Joy is constantly trampled in the booth by Waltrip. This happened again on the final lap last week.

It's been a long fall for Larry McReynolds. Removed from his Trackside program. NASCAR Performance became a show taped during the week. FOX ended his "Reach up and pull the belts tight" catchphrase. Now, the rumor that he may be out at FOX in the booth.

The corps of pit reporters are waiting in the wings to step-up and get more involved in the telecasts. Steve Byrnes, Krista Voda, Matt Yocum and Dick Berggren are experienced and incredibly underused. With all the potential for mayhem at Dover, this crew may finally get some quality air time.

Say it with me: Tight shots, single car views, in-car cameras, lack of field recaps and no aerial views. FOX made a decision of how to produce these races and they are sticking with it to the bitter end this season. So, here we go again.

This post will serve to host your comments on the NASCAR on FOX coverage of the Sprint Cup Series race from Dover. To add your TV-related opinion, just click on the comments button below. This is a family-friendly website, please keep that in mind when posting. Thanks for taking the time to stop by The Daly Planet.