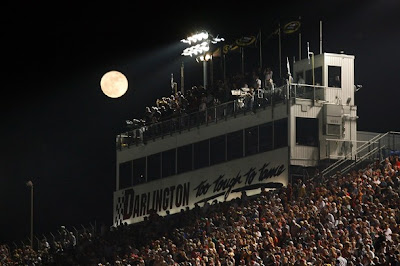 The night race in Darlington this year should be outstanding. Chris Myers will start the day from the Hollywood Hotel with Darrell Waltrip and Jeff Hammond. This pre-race show is only thirty minutes long. The green flag is 7:44PM ET.

Darlington is a track where the speeds have continued to climb, well beyond what the track was designed to accommodate. This means the action is always happening very quickly. Bottom line, it is tough to cover on TV.

Aerial shots are great, as well as the famous speed shots of the cars running right up against the outside SAFER barrier. Good directors keep the cars coming around the corner in the camera shot and stay wide while the leaders run down the straight. This lets the viewers watch the race for the lead and monitor the corners, where the action usually happens.

Pit road is going to be key at Darlington as never before. Tire strategy may come into play at a track where teams were formerly forced to take four every single time. Kyle Busch said earlier on TV that teams may take two tires in order to pass on pit road.

FOX had a tough outing last week, but Darlington may be just the place to recover. Issues last week included using in-car cameras while missing the action and the lack of updates before restarts. The big issue, as it has been this entire season, is the incredible amount of commercial breaks in the races.

This post will host your comments on the FOX coverage of the Sprint Cup Series race from Darlington. To add your TV-related comment, just click on the comments button below. This is a family-friendly website, please keep that in mind when posting. Thank you for taking the time to live blog the race with us tonight.
Posted by Daly Planet Editor at 6:15 PM 601 comments: 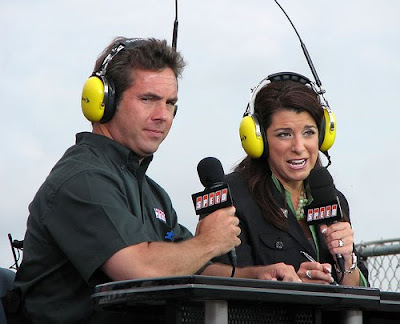 There has been an added focus on the RaceDay program recently. Darrell Waltrip announced that he was going to be joining the show, replacing Kyle Petty during the six summer TNT races.

This season Jimmy Spencer was removed from the panel and replaced by Petty. That left John Roberts and Kenny Wallace as the remaining original members. The show's two reporters, Hermie Sadler and Wendy Venturini, are also back. Rutledge Wood sometimes makes appearances depending on his assignments for the weekend.

Petty has changed the dynamic of the program with his plain-spoken style and his willingness to address any kind of topic. This has pushed Kenny Wallace to up his game. The old antics of the Wallace and Spencer duo are no longer the "in thing."

Venturini has teamed with Sadler to offer a very effective news presence for the program from inside the track. Recently, a new camera position was added that features these two standing behind a podium-style table. My feeling is that this takes away from the very feel of the original program that put TV viewers where they could not go. That being the the NASCAR garage and starting grid.

John Roberts has gotten a lot of attention this season with his dramatic change in hair color from brown to gray. Roberts advises that he is fine and just decided to stop coloring his hair for TV. Roberts has a smile on his face this season simply because he does not have to clean-up for Spencer anymore. No longer do apologies have to be made on a regular basis. Roberts certainly had plenty of practice at that.

RaceDay expanded to the two-hour format years ago, but that was based on adding prepared features like Venturini's Real Deal to the mix. This season, that feature was dropped and RaceDay is using more NASCAR Media Group features that have lots of neat editing, but little personality.

Sometimes, it looks odd to switch between the outside set with those panelists and the inside set where Sadler and Venturini stand awkwardly behind the fake table. This has been especially tough when conversations are flowing between the five primary on-air personalities.

In just a short while, TNT will begin to offer a ninety-minute pre-race show that will overlap RaceDay. Ironically, it will be Kyle Petty providing the competition. Without featuring Venturini and Sadler out among the drivers and fans for the entire show, RaceDay may have to rely on Waltrip and Wallace to keep viewers tuned into SPEED.

We are going to be live blogging RaceDay from Darlington. If this post gets a good response, we will consider doing this more often. To add your TV-related comment, just click on the comments button below. The live Sprint Cup Series blog will go up as RaceDay ends. Thanks for stopping by The Daly Planet.
Posted by Daly Planet Editor at 3:30 PM 34 comments: