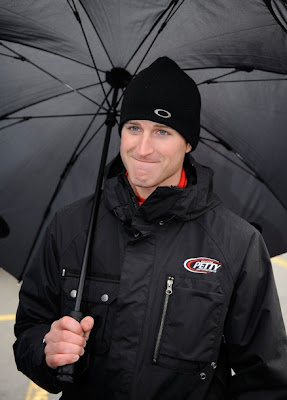 The young man pictured above might find himself answering the same set of questions many times during the day on Friday. Kasey Kahne and the rest of the Sprint Cup and Nationwide Series drivers are on the Texas Motor Speedway track all day long for practice and qualifying. That is, if Mother Nature cooperates.

The complete TV schedule is posted on the right side of the TDP mainpage. The start of the day should be interesting. ESPN2 has delayed the airing of Nationwide practice, so it overlaps with NASCAR Live on SPEED at noon ET. It is a rather unusual situation for NASCAR to have two programs from the same venue on the air at the same time.

The normal channel hopping happens as SPEED and ESPN2 swap between Cup and Nationwide coverage. Once the NASCAR activity is over, both networks go head-to-head once again at 6:30PM. Mike Massaro hosts NASCAR Now on ESPN2 while Steve Byrnes hosts Trackside on SPEED. Scott Speed and Paul Menard are the Trackside guests.

Capping the day is a doubleheader from SPEED. First, Rick Allen and Phil Parsons call the ARCA race from Texas. Then, a brand new series starts with the first NASCAR Hall of Fame Biography show featuring Bill France Sr. That certainly does seem like a logical place to start as SPEED ramps-up for the Hall opening this summer.

Let's use this post to offer comments on the Friday NASCAR and ARCA TV from ESPN2 and SPEED. To add your TV-related opinion, just click on the comments button below. This is a family-friendly website, please keep that in mind when posting. Thanks!
Posted by Daly Planet Editor at 5:00 AM 65 comments: