The day kicks-off with NASCAR Live at 3PM hosted by Steve Byrnes. Reporting from the pits and garage area will be Bob Dillner and John Roberts. This program reviews the NASCAR line-up for the day and the news.

ESPN2 is next at 4PM with Nationwide Series qualifying coverage. Dr. Jerry Punch, Rusty Wallace and Andy Petree will be in the announce booth. Dave Burns, Shannon Spake and Jamie Little will be covering the action from pit road.

Sprint Cup practice is on SPEED at 5PM. Steve Byrnes returns to host the practice session with Larry McReynolds and Jeff Hammond. It will be Lindsay Czarniak and Marty Snider handling the interviews and reporting from the garage.

Happy Hour coverage is next at 6PM with Byrnes and company in the booth. The reporters will change for this session and it will be Matt Yocum and Ralph Shaheen.

The Nationwide Series is on ESPN beginning with NASCAR Countdown at 7:30PM. Race coverage begins at 8PM with Jerry Punch and company. There will be a new post up for the race at 6:30PM.

Trackside comes along at 11PM with Byrnes, Hammond, McReynolds and Elliott Sadler. This week's featured guest will be Richard Petty who is celebrating his 50th anniversary in NASCAR. There should be some good conversation with the King from this panel.

This post will host your comments about everything on Friday except the Nationwide Series race, save those for the race post. To add your TV-related comments, just click on the COMMENTS button below and follow the easy instructions. The rules for posting are located on the right side of the main page. Thanks for stopping by.
Posted by Daly Planet Editor at 8:00 PM 14 comments: 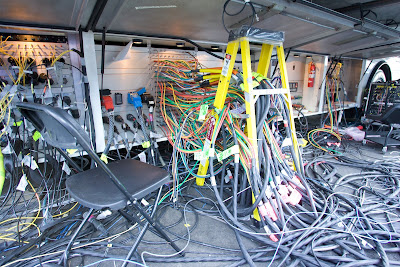 Updated information from SPEED below. We thank them for the response.

The picture above is of the side of an actual TV truck at a NASCAR race. Those cables are audio, video and other digital source feeds running into and out of just one truck. There are lots of these trucks in every NASCAR TV compound. If you want to see it full-size, just click on the picture. Thanks to ESPN for this photo.

Many NASCAR fans took the time to tune-in to SPEED at 2:30PM Thursday to hear the big announcement from Tony Stewart on the only motorsports TV network. SPEED would break into regular programming for this live press conference. Unfortunately, things did not work out too well.

It was John Roberts from the SPEED Stage who introduced Bob Dillner in the Infield Media Center at Chicagoland Speedway. Dillner did a short introduction and then stepped aside so Tony Stewart could take center stage.

The moment that the audio portion of the feed switched to the "pool feed" of the press conference, things went bad in a hurry. There was a buzz in the audio and it was persistent. There was no way to deny this was a very big technical problem.

If this had been an audio problem for every network and TV station recording or airing this announcement, there is no doubt the press conference would have been stopped. It was not. One quick change of channels showed ESPNEWS with the same video, but without the audio issues. This was a SPEED problem.

Things quickly went from bad to worse as suddenly the video portion, which had been without problems, went completely to black. Viewers could tell this was from the site because the SPEED logo inserted by the network was still in the corner of the screen. Now, the picture was black and the audio changed-over to a telephone line.

In the TV business, this kind of back-up audio is called a QKT line and is used for emergencies and technical difficulties that cause the entire signal to cease. In this case, rather than hear Bob Dillner or John Roberts tell us the problem, TV viewers heard Tony Stewart for a moment. Then, after a full-screen SPEED logo appeared for a while something surprising happened...a commercial break.

Apparently, SPEED's Master Control in LA that sends the network signal out to the cable companies had lost the incoming feed from Chicagoland and had no choice except to roll a commercial break. The content was promo's for SPEED shows, but other than return to the re-air of last week's Sprint Cup race, there was nowhere else to go. In the TV world, this is referred to as "being handcuffed."

Eventually, the video of the press conference returned, but it had exactly the same bad audio hiss and was almost unusable. You could make out what the panelists were saying, but it was clear that this was a TV mess. The heart-and-soul of what Stewart announced was missed during the commercial break. That was a shame for the fans, viewers and the TV network.

Stewart was in mid-sentence when host John Roberts re-appeared. Roberts had a sheet of paper in his hand and seemed to be reading a script of sorts while looking off-camera. This is usually an indication that the announcer things he is "voicing over" some video and does not know he is actually on-camera.

Roberts read a very brief summary of the Stewart/Haas racing announcement and then began to read a "throw" back to the replay of the Coke Zero 400. The only problem was that the press conference was still in-progress and the fans knew it. SPEED returned to the replay of the race and the nightmare that was the Stewart press conference on SPEED was over.

We all know technical problems can trouble any network, but this was interesting. ESPNEWS had no trouble with their live feed and NASCAR.com was streaming the same content live without a problem. Normally, TV crews do a "fax" check before any transmission which consists of checking all audio and video sources, including the satellite transmission pathway.

The Daly Planet has contacted SPEED to ask about the cause of the problem. We hope to have an official answer soon. It could range from just a bad audio cable to a failure of the satellite transmission uplink on-site. Whatever the reason, NASCAR fans who did not have access to ESPNEWS or a broadband computer had a tough time on Thursday afternoon.

As a final note, SPEED came back on-the-air at 4:30PM with NASCAR Live. Host John Roberts and reporter Bob Dillner never apologized for the problems earlier in the day, never referenced the incident and only replayed selected portions of the new conference.

At a minimum, the SPEED announcers should have told loyal TV viewers what happened and allowed fans to see a good size chunk of the press conference uninterrupted. Instead, Dillner did a summary for fans and the show moved-on.

This season, every network has experienced problems at one time or another. A while back, RaceDay was knocked off-the-air for over forty minutes. TNT lost their audio and video during a race this season. These things are going to happen from the racetracks, but this was very unfortunate timing for SPEED.

UPDATE: SPEED tells us that the audio issue once they switched to Tony Stewart was a problem with the multi-feed box that was supplying the "pool feed" audio. SPEED's audio problems were compounded by a software failure that caused the outgoing feed to loose video. The Fox guys in LA had no choice but to roll a commercial when they had no incoming signal. Ultimately, SPEED tried to route around the audio problem but without success. We thank SPEED for the info update.

The Daly Planet welcomes comments from readers. Simply click on the COMMENTS button and follow the easy directions. The rules for posting are located on the right side of the main page. Thanks for taking the time to drop by and leave your opinion.
Posted by Daly Planet Editor at 7:10 PM 35 comments:

In-Progress From Chicagoland: Thursday on SPEED and ESPN2

NASCAR teams take to the track on Thursday, as this is a night race from Chicagoland Speedway this season. Both SPEED and ESPN will carry live coverage.

John Roberts and company kick SPEED's day off with NASCAR Live at 4:30PM Eastern Time. Bob Dillner and Hermie Sadler will be Robert's reporters roaming the garage area and pit road. There should be a lot of news to discuss and some very interesting interviews.

Up next will be Sprint Cup practice at 5PM with Steve Byrnes calling the action. He will be joined in the announce booth by Jeff Hammond and Larry McReynolds. Down in the garage will be Lindsay Czarniak and Ralph Shaheen.

Go or Go Home is next at 6:30PM as this show continues to try and find a real format. Often, the remaining Sprint Cup stories from the earlier action dominate this show which was designed to focus on the teams that have to qualify on time.

Also at 6:30PM is NASCAR Now on ESPN2 which will originate from the Connecticut studios of the network. This thirty minute show will be hosted by either Ryan Burr or Nicole Manske and cover the news topics of the day.

ESPN2 continues with live Nationwide Series final practice at 7PM. Once again, first practice was not televised. Dr. Jerry Punch will be joined by Rusty Wallace and Andy Petree in the booth. On pit road will be Dave Burns, Shannon Spake and Jamie Little. Allen Bestwick will man the Infield Pit Center with Brad Daugherty.

After a short break, Sprint Cup qualifying returns at 8:30PM. Byrnes and company return in the booth with Marty Snider joining Ralph Shaheen on pit road this time.

This weekend finishes a long run of SPEED covering almost every single Sprint Cup practice and qualifying session in 2008. Telecasts have featured Mike Joy and Steve Byrnes in the host position. Darrell Waltrip, Jeff Hammond and Larry McReynolds have been in the booth. A ton of personalities have been on pit road and in the garage area. SPEED has done a great job this season and deserves to be commended.

This post will serve to host your comments about the Thursday NASCAR TV from both SPEED and ESPN2.
Posted by Daly Planet Editor at 3:00 PM 12 comments: