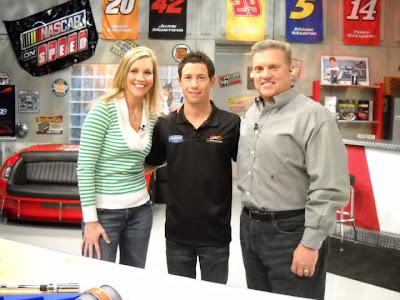 The saga of the only NASCAR news show produced by SPEED continues to unfold. The network announced Monday that beginning June 28 the Monday through Thursday Race Hub program will expand to one hour in length.

It was very clear before the season that SPEED had goofed with the original thirty minute format. ESPN's NASCAR Now uses an hour on Sundays to preview and an hour on Mondays to review the Sprint Cup Series races. While the Tuesday through Friday NASCAR Now shows are only thirty minutes, the emphasis of the Bristol, CT gang is very different.

SPEED made it clear from the start that the focus of Race Hub was to exploit the network's Charlotte, NC studio location that is just a short drive from almost all of the major NASCAR teams. SPEED has made good on this promise with a parade of NASCAR personalities from president Mike Helton to rookie drivers in the truck series.

Thirty minutes of TV is only about twenty-two minutes of actual content. Chop that up with four commercial breaks and what is left is five little pieces of program. Now that SPEED has committed to a hour, that brings a much more flexible platform for a new program format.

Just like ESPN's SportsCenter, SPEED can now set up regular features on the Monday through Thursday Race Hub shows. In addition to bringing some added sponsorship, there are all kinds of possible content ideas. Social media feedback, fan photos, video replies to Jimmy Spencer and a featured crew member of the week are just a couple suggestions. The possibilities are endless.

Hopefully, SPEED will also work on revamping the Race Hub studio. All this standing around in blue jeans is getting a bit old. Some new set pieces are needed in support of the much larger one hour effort. It should be interesting to see what emerges.

In front of the cameras, there have been some surprises. In terms of studio analysis, Ray Dunlap and Jeff Hammond have been super. Dunlap has mixed it up with the truck guys and does not pull punches when he is talking about issues. Hammond has been great in the spotlight and shown a very different side than the one fans see on the FOX telecasts.

Recently, SPEED has been trying Jimmy Spencer in his curmudgeon role on the program. Spencer needs a little more structure and guidance, but his personality is the kind that drives fan feedback and that is exactly what the series needs right now.

Finally, it's time for a host. A lot of the SPEED on-air talent have taken a turn hosting and it's not hard to see who fits in this format and who does not. Veteran fans know the studio show backgrounds of Steve Byrnes and Krista Voda. Other favorites include Wendy Venturini and Ralph Sheheen. Someone has to take the lead and hosting four hours of NASCAR TV every week in primetime is a pretty nice job.

It's great that SPEED has made this commitment. Now, it's time to see if they can step up and offer hard news and opinion instead of more NASCAR marketing and PR. That is always the temptation, especially in this highly-charged media "happy talk" world that exists.

There is absolutely no reason that the expanded Race Hub cannot quickly become the flagship NASCAR news program that SPEED has needed for years.

We welcome your comments on this topic. To add your opinion, just click on the comments button below. This is a family-friendly website, please keep that in mind when posting. Thanks for stopping by The Daly Planet.
Posted by Daly Planet Editor at 7:00 AM 29 comments: