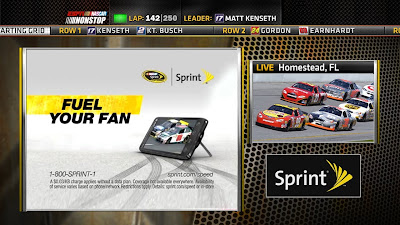 Sunday will be the first time since the new NASCAR TV contract began in 2007 that a coordinated effort between multiple media partners has the sport ready to compete with the NFL.

Let's review some of the changes involved in putting NASCAR in this position:

NASCAR.com finally got the go ahead to offer a full-scale free RaceBuddy application for the Chase races. Fans can now hit the Internet for eight additional video sources, team scanners from the in-car cameras and real time scoring. Turner Sports Interactive is providing this service.

ESPN will be able to provide 9 of the 10 Chase races on the Watch ESPN app. This means existing customers will be able to view the races and the NASCAR Now program on laptops, iPads and smart phones. Click here for a complete list of all cable providers offering the service.

NASCAR Nonstop is the term ESPN coined for the new side-by-side commercial format that the network will be using during the Chase. In the second half of all the Chase races, ESPN will switch to the view you see above during commercial breaks. The race and scoring will continue while the commercial rolls. ESPN will immediately return to the race if there is an incident on the track.

SPEED's popular one-hour Victory Lane show will now start as soon as ESPN or ABC signs-off after a Chase race. The program will have a flexible starting time and will try to get the existing TV audience to switch over to SPEED when the live race telecast is done. John Roberts, Kyle Petty and Kenny Wallace talk with the winning driver, crew chief and owner. Bob Dillner interviews other drivers and personalities in this extended post-race format.

ESPN will use the resources at the track and back in the Bristol, CT studios to air a one hour NASCAR Now wrap-up show after each Chase race. The program from Chicagoland this weekend airs at 11:30PM ET on ESPN2. This lets the network use those who participated in race telecasts for observations. The show will originate from the ESPN studios with various hosts.

This season NASCAR TV veteran Allen Bestwick will call all ten Chase races. ESPN tried Dr. Jerry Punch and Marty Reid in this position, but Bestwick is a true NASCAR media personality with a base of knowledge about the sport that is second to none. His work ethic is well-known and it will be the first time a strong on-air personality will lead the TV telecasts.

The Sprint Cup Mobile app continues to provide both information and live video to Sprint users. The app contains multiple links to sources that provide updated information on the series and the Chase. Multiple channels of live audio are also provided during the races, including the NASCAR officials channel.

Click here for the official Sprint Cup Series Facebook page. It will probably top 2 million subscribers who "liked" it by Sunday. This page has come a long way and now pumps out tons of great links, pictures and videos. It is a must to follow for the Chase with items that will not be seen on other websites.

Twitter is something that does not really make sense until you use it. It's free, easy to operate and works on a smart phone, iPad or almost any kind of online device. As a hardcore race fan, it is simply the best tool for updated NASCAR information ever invented. It allows any user to create a customized stream of information from series, teams, drivers, racetracks, sponsors or media organizations. Fans can interact directly with Sprint Cup Series drivers on Twitter and see exclusive content. Regardless of what your skeptical friend might say, it's not about who got a haircut and where someone ate lunch.

There is no doubt that this first Sunday of NASCAR going head-to-head with the 1PM and 4:30PM NFL games is going to leave a mark. But now, instead of having only one TV source for live information, fans are going to be surrounded by more types of online and social media applications loaded with content.

It's great to finally see cooler heads prevail and priorities get sorted out for NASCAR's version of the playoffs. It's going to be quite different this season when fans can have the local NFL game on one TV screen but enjoy the option of NASCAR on a variety of devices from iPads to smart phones.

How are you going to configure your Chase media center? Have these additional options made it easier for you to keep NASCAR active in NFL season? Happy to have your opinion on this subject, it's a brand new playing field this time around. 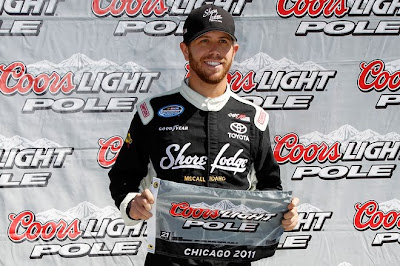 The Nationwide Series again has the smell of a Cup-dominated Saturday. The fast Chicagoland Speedway has lent itself to the more experienced drivers in the past.

Rusty Wallace will be on the pre-race show with host Nicole Briscoe and Brad Daugherty. Dave Moody from Sirius Speedway reported that Wallace's current NNS sponsor, 5 Hour Energy, is leaving next season and moving to the Cup Series with Michael Waltrip Racing and driver Clint Bowyer. That topic should be interesting.

Marty Reid, Dale Jarrett and Andy Petree will call the race. There are a handful of NNS regulars still trying hard for the driver's championship. Unfortunately, ESPN is star-struck with the Cup drivers and once again they will be given center stage on TV.

The racing is typical aero track style, with little passing and lots of importance on pit stops under both green and caution flags. TV has no choice but to follow the groups of cars close to each other as passing has been at a premium. Restarts yield the excitement in the race and should once again tell the tale of the race.

It's tough to get excited for this coverage as ESPN squeezes the NNS into a hole between college football games. The network has covered nothing from Chicagoland today, including qualifying for both the NNS and Cup Series.

One good story has emerged, as talented young driver Brian Scott has the pole for the event. This post will serve to host your comments on the ESPN2 coverage of the NNS race from Chicagoland Speedway. Just click the comments button below.