"Race Hub" Takes It On The Chin Again 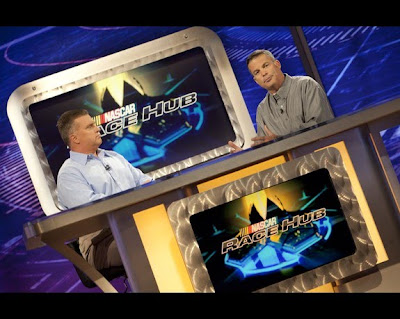 The saga of the TV series created to offer NASCAR news, interviews and features on weekdays at SPEED is fascinating. Race Hub started as a thirty minute show with a rotating cast of hosts and reporters.

"SPEED Jumps In The NASCAR News Game" was the TDP column from September of 2009 when Race Hub suddenly sprang up on the network from out of the blue. Lots of things about this show didn't make sense in terms of timing, but for NASCAR fans frustrated by the network's excuses, any racing show was welcomed.

For years the network had been peddling endless "lifestyle" shows on weeknights and offered nothing but excuses to the fan base about the lack of NASCAR programming. Race Hub was perhaps the result of a mad scramble to get something on the air and fill that void in order to accomplish a bigger goal.

While Krista Voda and others did an admirable job of hosting Race Hub in 2010, several things quickly became clear. First, the show needed a full time host to establish a presence and personality. Secondly, covering the NASCAR shops and facilities in the area required a full time reporter. Finally, the show needed to be an hour in length for all four Monday through Thursday programs.

Steve Byrnes made a big decision and changed the strategic direction of his TV career by accepting the role of full time series host. It was the right decision. Byrnes combined with reporter Danielle Trotta to cover an incredibly diverse landscape of NASCAR personalities and topics.

The show settled into a 7PM Eastern timeslot with a 9PM Pacific re-air. Now, NASCAR had a weekday TV platform in primetime on a major cable network to feature the activity in the sport away from the track. Perhaps, it was too perfect.

"Puzzling TV Changes At SPEED" was a TDP post from last September. Just as strangely as it had arrived, Race Hub was now the victim of an incredibly poor programming decision in the heart of the 2011 NASCAR season.

In mid-September, Race Hub was moved to 6PM Eastern time and the re-air moved to 11PM Pacific. 6PM is the traditional hour of TV news on the East Coast. It is also the time for the featured SportsCenter show of the evening on ESPN. In 2012 the NBC Sports Network also rolled out SportsTalk, an hour of national sports news and interviews, in the very same timeslot.

Where NASCAR fans are concerned, this move by SPEED overlapped the final hour of the powerful Sirius Speedway show on SiriusXM NASCAR with Dave Moody and Angie Skinner. Moody has a wide variety of guests, many of whom are on the show after making news that day or being involved in ongoing NASCAR issues.

At the end of the day, pushing Race Hub out of the early primetime cable window was a tough decision to swallow. Fan feedback on moving the West Coast re-air to 11PM was also overwhelmingly negative. Well, fasten your seatbelts because SPEED has done it again.

The network has confirmed that Race Hub will remain in the 6PM timeslot this season, but the West Coast re-air has been effectively cancelled. Instead, the show will only re-air the following morning at 7AM Eastern time. Lets look at these two issues.

As we mentioned, the 6PM original air time puts Race Hub up against powerhouse sports and news programming of all kinds that has been firmly entrenched in that timeslot for many years. Although SPEED now has Byrnes host the show live, that makes little sense if many viewers are forced into other choices at that time.

The real head-scratcher comes with the end of the West Coast re-air. This season, NASCAR fans from Seattle to San Diego can only catch Race Hub at 3PM and then 4AM the next day. As one California viewer emailed, she will be working for the first airing and sleeping for the second.

This isn't an issue about DVR's and recording devices. Networks want their premier products to be seen as they air and that is the entire science behind TV program scheduling. The science behind these recent decisions may still be unexplained.

The original idea was that Race Hub would run at 7PM followed by three hours of primetime programming. Then, that four hour block would re-air at 11PM, which is 8PM Pacific. Regular viewers of other cable networks see the same type of pattern which allows multiple timezones to be served with a single satellite feed.

SPEED's new interim president is Scott Ackerson, a FOX Sports veteran joining the network from Los Angeles, CA. Ackerson is in the process of making changes throughout the company, but is once again saddled with a variety of worthless "lifestyle" shows that flopped.

Ackerson spoke to the Charlotte Business Journal's Erik Spanberg recently about the network's NASCAR agenda. "I’m hoping that we’re able to personalize the drivers a bit more, so that the viewers get a chance to know these people better," Ackerson said. "If they know people better, the more apt they are to watch."

Ackerson told Spanberg that SPEED will call on drivers to sit for more extensive interviews and features, using the material on multiple shows in multiple airings across the network. Click here to read the entire story.

Those words seem ironic for a network that purchases its weekend Sprint Cup and Nationwide Series TV coverage fully-produced from the NASCAR Media Group. One key reason SPEED created Race Hub was to finally put an in-house network production stamp on a NASCAR product.

So, there you have it. Race Hub will be at 6PM ET with a single re-air the next morning at 7AM beginning next week. It's a shame to see this series move from "must-see" to just another title on the recorded program list for many fans. Good luck to all those involved in Race Hub as the sport heads to Daytona.