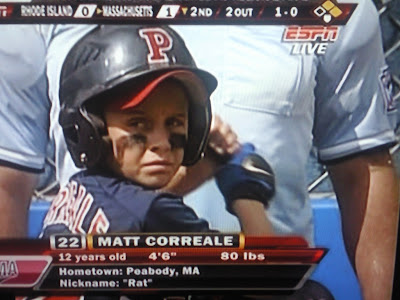 Sometimes, when you get it from all sides the smart thing to do is retreat. Fans have been coming from every direction this week asking the same thing. Why did ESPN2 bump the 5PM airing of NASCAR Now Tuesday through Friday?

The easy answer is that Little League baseball is airing on ESPN2 during that timeslot. The big problem is that this is truly a historic week in NASCAR news. Not having this TV show on the air at 5PM is rough.

From Kasey Kahne at Red Bull Racing to the largest schedule realignment in recent memory, the news has been non-stop since Monday. The Sprint Cup Series coming to Kentucky Speedway and a second time to Kansas has also brought a lot of media and fan reaction. Danica is back this week and the trucks can't even get a full field for Darlington.

It should be pointed out that Shannon Spake is hosting new episodes of NASCAR Now this week airing at midnight Eastern Time or slightly later. While 9PM might work for our West Coast friends, there are apparently some rather unhappy race fans in the other time zones.

NASCAR Now is one of the most popular shows for the DVR because the 5PM airing allows fans to get home and catch right up to date on all the news. ESPN.com has been posting stories on the same topics, but the daily TV show is the heart and soul of the commitment that ESPN made to NASCAR back in 2007.

Over the past couple of years, we have offered suggestions when this situation has happened. Unfortunately, airing thirty minutes of NASCAR Now on ESPN or ESPNEWS or ESPNU or even good old ESPN Classic has just not been something the corporation has chosen to do.

There has been a solid start to the Sprint Cup Series coverage on ESPN this season. The extended post-race shows have been a treat. Coming off a great weekend of coverage at Watkins Glen, there was good momentum heading into Michigan.

The decision not to move NASCAR Now to ESPNEWS or ESPN for the East Coast audience this week is one that may prove to be costly. These days, SPEED offers an alternative in the Race Hub program airing at 7PM. ESPN2 is no longer the only game in town when it comes to a daily NASCAR news program.

This post is simply to get the comments on this topic in one location. Please feel free to offer your opinion. There will be a new post Wednesday updating other TV stories including details of changes at SPEED and coverage of upcoming special events. Check back with us during the day.

As always, this is a family-friendly website, please keep that in mind when posting. Thanks for taking the time to stop by and check the TV schedule on the left side of the main page for the latest information including announcers and guests for all the NASCAR TV programs.
Posted by Daly Planet Editor at 1:00 AM 30 comments: