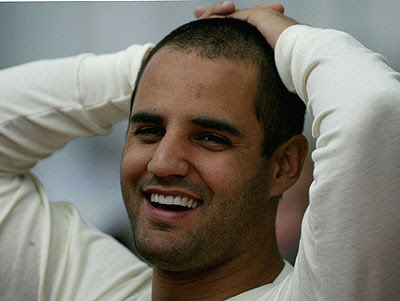 I settled-in with my DVR to watch the second episode of ABC's NASCAR in Primetime series with a little trepidation. The first installment was an interesting event, and pulled fans over to ABC simply because of the word NASCAR. Now, the challenge for the network was to hold them.

Despite what the summertime TV ratings might say, the second episode of this series was simply riveting. The words and emotions of the drivers and the many others interviewed worked so well together, I went back and watched the entire thing again.

Now, I understand much better what the ABC News production team was trying to do with these selected individuals. The sagas of Johnny Sauter, Mark Martin, and Juan Pablo Montoya were in reality several months old. But, with outstanding video and audio editing, the show stepped out of the "news" mode and stood on its own as a slice-of-life documentary.

Sauter's words were particularly emotional, and really allowed both his strengths and flaws to be exposed to the viewers. Through the additional comments of his girlfriend, crew chief, and even his grandmother, this complicated man was simply shown for who he is without judgement or reproach. That was the power of the Sauter piece, having the true nature of this driver revealed by his family, co-workers, and ultimately...him.

Mark Martin finally cleared-up for a lot of fans his true feelings about all the people in the media that hammered him to get back in the car for the entire season. Basically, he said they did not know him and were naive. After thirty years in racing, it meant nothing for Mark to be tops in points very early in a very long season. Throughout this piece his family and his new found enthusiasm for his part-time racing career were wonderfully balanced. Looking thin and small out of uniform, the Mark Martin on this episode was an introspective and thankful man.

Finally, the best part of the entire show was none other than the "Latino Intimidator." Juan Pablo Montoya has been picking up more Internet nicknames than Barack Obama. There has rarely been this polarizing a force in NASCAR, and the fact that he does not even have a strong fanbase at the track seems to mean absolutely nothing to him.

Montoya simultaneously draws and repels NASCAR fans. His talent, his charisma, and the sheer curiosity of finding out who this man really is brings the fans to anything in the media with his name on it. But, just as quickly, his lack of respect for his peers, his seemingly arrogant manner, and the lingering smell of an "open-wheel whiner" causes fans to take a step back.

He can be a wonderful family man in his motorhome one minute, and then a self-absorbed primadona who can never be wrong the next. Whether he is the next Dale Earnhardt Sr. or just another open-wheel hotshot who came and went is going to be fascinating. The words he speaks in this episode were not heard anywhere else. ABC had a point in saying that lots of this content was exclusive.

Montoya is flat-out in your face during his time on this show. His mood swings between happy father, loving husband, and aggressive driver were captured with great skill. He was not painted into a character, but allowed to draw his own profile. That is the element that many of the regular NASCAR TV shows do not take the time to do with him. They just paint him as whatever they need to fill their three minutes.

ABC can certainly be blamed for trying their best to keep the redneck image of this sport alive. Their "fans" are right-out of central casting, and seem to represent a lot of what this sport was, rather than is now. The closing sequence was way off-base and jolted the viewer back from the emotional feelings of the three drivers.

Overall, even cynical NASCAR fans have to give ABC a nod on this episode. It was upfront, honest, and presented another slice of three lives that would not be on TV if not for this series. The Survival of the Fastest series on SPEED is great, but built on a different format. This documentary style long form programming approach was a good compromise for both the hardcore fan and the casual viewer.

NASCAR in Primetime lost out for live viewing to the Craftsman Trucks at Bristol on Wednesday night, with good reason. But, as a program to put on the DVR, and watch in a relaxed moment, this episode really stepped-up both the emotion and the action on the track and off. I am going to watch the rest of this series, and I hope ABC can continue their excellent level of TV production.

The Daly Planet welcomes comments from readers. Simply click on the COMMENTS button below, or email editor@thedalyplanet.tv if you wish not to be published. Thanks again for taking the time to stop-by and leave your opinion.
Posted by Daly Planet Editor at 6:59 PM 10 comments: