Your Turn: Sprint Cup Series From Indy On ESPN 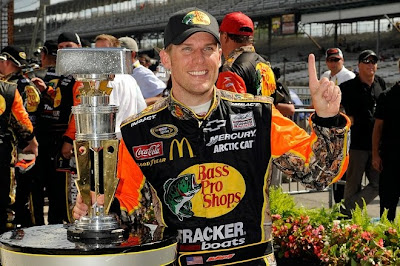 This is the fourth season of ESPN covering the Sprint Cup Series down the stretch.

The network offered a one-hour pre-race show anchored by Allen Bestwick. Joining Bestwick in the Infield Pit Studio were Ray Evernham, Rusty Wallace and Brad Daugherty. They offered several pre-produced features, some interviews and discussions of race strategy. Tim Brewer was in the Tech Garage.

The actual call of the race was being done for the very first time by Marty Reid. He was joined in the TV booth by Dale Jarrett and Andy Petree. Down on pit road were Dr. Jerry Punch, Jamie Little, Dave Burns and Vince Welch.

Reid was thrown a curveball right away with a major incident in turn one that took a while to sort out. From there, the race took quite a while to settle down as cars overheated and needed to pit out of sequence.

ESPN offered good pictures and sound with no technical problems. There were no weather delays and no red flags. The caution periods were limited and the racing was the style we have come to expect from this track.

This post is an opportunity to offer your comments on the ESPN race coverage before you hear mine. Just click on the comments button below and offer a wrap-up of the coverage. This is the most widely-read post on our site. Thanks for stopping by.
Posted by Daly Planet Editor at 12:15 AM 74 comments: