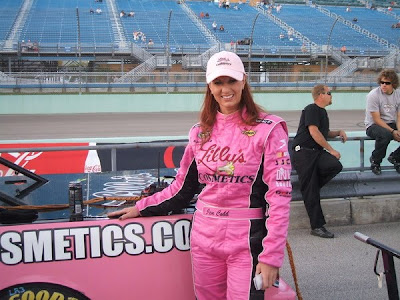 It's been a mixed year for the Camping World Truck Series. The economy put the whammy on some of the top teams and drivers, changing the line-up of the series and the competition for the championship. The good news is once again the simple and straightforward telecasts on SPEED kept hardcore racing fans coming back for more.

As the series heads into the final race, Todd Bodine has clinched the championship but other stories are perking up for 2011. Jennifer Jo Cobb, pictured above, is headed for a top 20 finish in the series, possibly as high as 17th place. That will make her the highest finishing female in any of the three national touring series in NASCAR history.

Aric Almirola leads a group of well-known drivers who will be coming full time to the NCWTS next season. There is hope on the horizon for this series with the continuing TV package with SPEED and perhaps the best driver line-up in many years. Head over to Jayski.com and click on the truck series link for more information.

Krista Voda will host The Setup pre-race show with Ray Dunlap and Adam Alexander as the reporters. Voda has put her stamp firmly on this series with her Midwestern style meshing perfectly with the overall production. There is a lot of information passed along to viewers in this pre-race format featuring only one voice.

Rick Allen, Michael Waltrip and Phil Parsons will call the race. This TV team is comfortable with each other and reliable on the air. Waltrip's former tendency to drift off into sponsor mentions and politically motivated content has been mostly curtailed. His understanding of his actual role as the third member of this team made a lot of difference on the air.

Our fundamental belief is that fans should make those decisions and that the role of TV is to pass along as much of what the fans at the track are seeing and hearing as possible. It that includes start and parkers, trucks pulling off the track or other items that might not paint the sport in a glowing light, it should still be included.

Parsons had a tough summer as he stepped into an unfamiliar role as a pit reporter for TNT and his on-air behavior drew criticism. Comfortable in the TV booth for years, Parsons simply could not bring himself to fill the reporter role and ask the tough questions before, during and after the TNT Sprint Cup Series races.

It should be very interesting to see just how SPEED chooses to present this final race. There is a new management team at SPEED. The rumor is that there will be some new faces in some new places for next season. Look for every member of this on-air team to be intense all night long.

Homestead holds few TV surprises. The night pictures and sound are great, the Florida weather has cooperated and the wide racing surface lets the trucks put on a good show.

Don't forget that NASCAR.com has an online app free called Truck Buddy. Dodge Ram sponsors a couple of extra cameras and two in-truck cams so viewers can have some fun. Hopefully, this streaming project will grow next season to include all the races in the series.

This post will serve to host your comments on the TV coverage of the final Camping World Truck Series race of the season from Homestead, FL. To add your opinion, just click on the comments button below. This is a family-friendly website, please keep that in mind when posting.

There will be a post-race column asking for your views on the entire NCWTS season of coverage on SPEED next week. Thanks for stopping by The Daly Planet.

Biggest TV Friday Of The Season 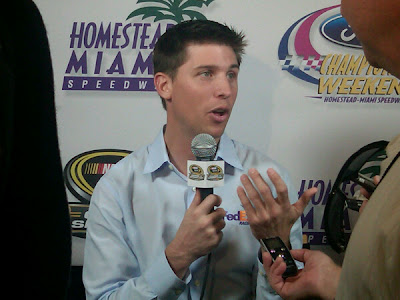 Who knew it was going to come down to this? First, the trucks are going to race under the lights on Friday. Then, the Nationwide Series sets the stage with a day race on Saturday. Finally, the big showdown between three top Sprint Cup Series drivers for the championship with everyone else running all out just to win the race.

It's going to be important to get Friday started right. ESPN's TV team is up first with Cup practice at 11:30AM on ESPN2. The late Thursday truck series practice got rained out, so the trucks have the track in the hour prior to this telecast. That should make pre-production a bit noisy.

SPEED is up at 1PM for Nationwide Series practice. Steve Byrnes flew down to anchor this coverage after coming off the road for several months to anchor the new one-hour Race Hub show. Kudos to Wendy Venturini who is working at a reporter for SPEED this weekend despite being in the late stages of her first pregnancy. She and Bob Dillner are the reporters for SPEED.

At 2:20PM it's going to be interesting. Both ESPN2 and SPEED are live. Over on ESPN2, Allen Bestwick hosts NASCAR Now. Meanwhile, it's John Roberts from the SPEED Stage hosting NASCAR Live. Tough choice these days with both shows being solid and offering essentially the same information.

3PM is the big Cup Series qualifying show on ESPN2. Very important to qualify well in this race for the top three championship teams. Avoiding a start at the back could be avoiding potential disaster. ESPN will have Marty Reid, Dale Jarrett, Andy Petree and a cast of thousands on this program.

At 5PM the truck series team for SPEED will call qualifying. Rick Allen, Michael Waltrip and Phil Parsons have been a steady presence all season long. at 6PM Roberts comes back with another edition of NASCAR Live and at 6:30PM Byrnes will wind-up his day with Nationwide Series final practice.

We will live blog the truck series race Friday night on a new post. This will serve to host your comments on all the daytime TV on ESPN2 and SPEED on Friday. It should be fun to watch. To add your opinion, just click the comments button below. This is a family-friendly website, please keep that in mind when posting. Thanks for stopping by!