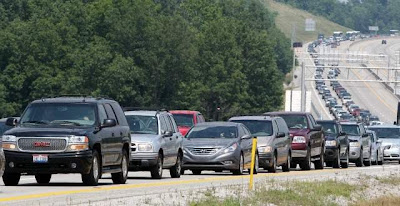 By the time Monday rolled around, it was very clear that the Kentucky Speedway traffic story had gone viral. Even the mainstream media had clamped onto the story that thousands of Americans had been trapped in traffic for many hours and were angry at everyone from the Kentucky State Police to the speedway owner.

The subsequent response from the facility and its parent company, Speedway Motorsports Inc., fell flat. Hazy statements expressing regret and passing blame were exactly what SMI did not need. This situation was heightened when NASCAR Chairman France put out a strongly worded statement saying bluntly that this cannot happen again.

Both ESPN's NASCAR Now and SPEED's NASCAR RaceDay had pre-race shows on Saturday. The ESPN show was long gone by the time SPEED came on at 4:30PM ET with RaceDay. By then, the traffic problems were all the talk of Twitter, Facebook and the wonderful world of social media.

Produced by the NASCAR Media Group for SPEED, RaceDay shook off any temptation to chase the traffic story and instead followed the company line of simply promoting the inaugural race.

The boasts of panelist Darrell Waltrip, whose own Kentucky roots were profiled in a TV special earlier that day, now seem incredibly ironic. As Waltrip and RaceDay partner Kenny Wallace carried on, thousands of NASCAR fans were hopelessly trapped in a logistical nightmare that defied explanation.

TNT followed the RaceDay lead and never actually reported on the developing story. Despite being on the air for more than four hours, TNT chose to focus on what was going on inside the track rather than outside. Tweets from TNT on-air personalities did made it clear, however, that they were aware of the disaster that was unfolding.

It is often left to the two Monday NASCAR TV shows to sort-out the details of the weekend. Monday's NASCAR Now was up first as host Allen Bestwick presented an hour of highlights and conversation. Despite several mentions during the show, it was 48 minutes into the program before the traffic story surfaced.

Bestwick spoke by phone with Kentucky Speedway General Manager Mark Simendinger after showing some soundbites of angry fans and recapping the statement from Brian France.

"All I can tell you is that our traffic plans failed miserably," said Simendinger. "Hearing the stories that you just played makes me sick. I don't know what to say other than the fact that we totally blew it. I really feel badly for what we put our fans through."

Simendinger updated the offer from SMI for Kentucky Speedway fans affected on Saturday to redeem their Sprint Cup Series tickets for another race at the speedway or any of the SMI-owned tracks.

"Today for us is about connecting with those fans that we injured," Simendinger continued. "There is no excuse for it and we are totally to blame."

The advantage RaceHub has over NASCAR Now is that the SPEED studios are literally a short drive down the road from the Charlotte Motor Speedway. It was SMI President Marcus Smith, son of Chairman Bruton Smith, who stopped by to speak with show host Steve Byrnes.

"It's really tough to say what happened or what could have been different," said Smith. "In hindsight, we can see where we need to make adjustments. We have been hard at work on this since Saturday and we are going to make a big difference next year."

Smith then echoed the earlier comments of Simendinger about the SMI ticker redemption policy. Smith's comments were more specifically directed to the fans who never got into the race track as that was the topic being discussed.

"We really pride ourselves on being the best in racing with fan amenities and customer service," said Smith. "So, for something like this to happen is very unusual. We are sad that it happened and really want to try and make it right."

It would have been nice if Smith looked right into the camera and apologized, but the fact that he appeared with Byrnes was a positive move. It clearly was not as personal to Smith as it was to Simendinger, but the appearance and the refund information was made clear.

The item left on the table by both TV shows is what becomes of the fans who never made the race and cannot or do not want to attend another event. The word "refund" has never been mentioned and seems that it will not. It should be interesting to see how that topic sorts itself out over the next couple of weeks.

The rumor going around ESPN is that in September NASCAR Now on weekdays will be moved from 5PM Eastern back to 3PM in order to make room for ESPN's homegrown hit Sports Nation.

Often, as with this Monday's show, the big one-hour 5PM "roundtable" does not re-air. NASCAR fans have one shot to see it at the scheduled time or record it for viewing when they get home. This shift to an even earlier time in the heart of the NASCAR season is not a good thing for anyone except ESPN.

It seems the SMI group turned to TV on Monday as an integral part of cleaning up the public relations mess of the weekend. Once again, it's nice to have two NASCAR TV partners producing programs that can get the job done.

We welcome your comments on these topics. To add your opinion, just click on the comments button below. Thanks for stopping by.