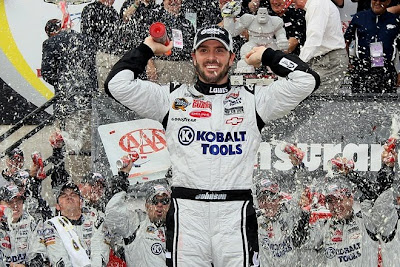 Sunday afternoon the NASCAR on ESPN team presented the second race in the 2010 Chase for the Championship. The Sprint Cup Series started the day on ESPN2 with a one hour pre-race show.

Allen Bestwick, Rusty Wallace and Brad Daugherty appeared from the Infield Pit Studio. Bestwick interviewed Richard Childress and Mike Helton about the issues associated with the penalties handed down to the #33 team of Clint Bowyer.

Marty Reid, Dale Jarrett and Andy Petree called the race in the TV booth. Down on pit road were Dr. Jerry Punch, Vince Welch, Dave Burns and Jamie Little. Tim Brewer was in the Tech Garage.

The day was long due to the lack of real racing and the inability of the cars to pass each other on the track. The normal tight Dover racing never happened, but teams instead struggled with changes made by the pit crew on stops.

The TV pictures were fine and there were no technical problems. The race ended at 4:20PM ET with no red flag periods or extended cautions. There was weather in the area, but no rain halted the race at any point.

This post will host your TV-related race wrap-up comments. To add your opinion, just click on the comments button below. This is a family-friendly website, please keep that in mind when posting. Thank you for stopping by The Daly Planet.
Posted by Daly Planet Editor at 1:30 PM 88 comments: