"This Week In NASCAR" Looks A Lot Like "Trackside" 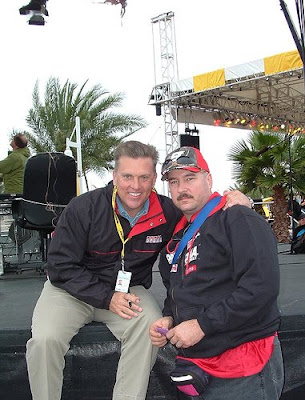 On the very popular Trackside show on SPEED, host Steve Byrnes has a live audience and three panelists who talk NASCAR for an hour. The result is a raucous show that features a lot of conversation on some good NASCAR topics.

Since the transformation of Inside NEXTEL Cup to This Week In NASCAR, Byrnes has been leading a show still looking for its identity. Normally, two panelists and Byrnes sit alone in the NASCAR Media Group studio and divide their time between previewing the next race and reviewing the past racing weekend.

On this Monday, SPEED stole some elements from the Trackside format to offer a very different version of TWIN. Byrnes hosted an expanded panel of four from the Speedway Club at the Lowe's Motor Speedway. The show was even taped before a live audience.

Joining Byrnes were Michael Waltrip, Kenny Schrader, Chad Knaus and Greg Biffle. These four comprise the panelist that normally rotate through the TWIN programs two at-a-time. On this day, SPEED used the All-Star race as the feature of this show.

TV viewers might have raised an eyebrow when the cameras first revealed the temporary set for this program. It looked a lot like the Monday NASCAR Now show on ESPN2 with the on-air announcers casually seated on high stools in an open set.

As usual, this program began with a preview of the next event despite the fact that several key people involved in the stories of Darlington were seated on the panel. Byrnes dutifully led the panel into an extended conversation about the All-Star race and its history.

Unfortunately, over the last several years SPEED has chosen to emphasize the crashes and suggest that "fisticuffs might ensue" because of the high level of excitement. The actual racing and the format gets lost in this hype, which is something not normally seen in most SPEED shows.

While SPEED tried to create a background behind the panelists, the same was not done for Steve Byrnes. He spent the evening hosting the show with two audience members heads poking over his shoulder. By the end of the evening, this had gone from distracting to aggravating. It was a problem that could have been easily fixed.

Schrader brings a dynamic to the show that is always self-effacing and in good humor. When he is present, everyone can take a deep breath and relax. Several times during the All-Star segment, Schrader stepped-in and brought things back into perspective very quickly. He really is key to this program in several different ways.

Eventually, the panel turned their attention to the action from Darlington. This led to Waltrip and Schrader returning to their conversational relationship that they had developed from years on the "old show." This put Greg Biffle trying to fit-in and Chad Knaus completely off his game. Both three other panelists and a live audience must have been a very new experience to Knaus in his rookie season on this program.

Biffle has worked hard on his TV skills over the past several seasons, and has improved tremendously on-the-air. It is clear that he is frequently not amused by Waltrip's antics and both Biffle and Knaus tend to take things very seriously when they are answering a question.

Byrnes did a good job of following-up with Knaus by asking him specific questions, especially the ones that could have used a crew chief perspective. Knaus is going to have to learn to jump-in without being called on if he is going to work in this TV format.

Byrnes is also still finding his way, and this show is not responding to the kind of hosting he has done so well for SPEED over the years. The success of this program depends on the panelists to get the attention and have the last word. Byrnes is used to putting the cap on the conversation and is challenged by this new dynamic.

There is no doubt that the on-air talent is following the directions of the production team. Ultimately, Byrnes and company must do what they are told. This program was a stripped-down version of the "feature heavy" shows from the studio and left more time for conversation. If this movement continues, SPEED may find that the most essential element of this show cannot be written, edited or placed on a format.

They key element of this program is the interaction between personalities that are involved in the sport. That interaction has to be allowed to continue for more than thirty seconds or a minute. The less edited features and interviews the better, as veteran fans can attest.

If Byrnes had just thrown-out topics and allowed the panelists to simply talk, it would have resulted in the same kind of free-wheeling conversations that put this original TV series on the map. The highlights have already been seen by the fans, and few are captivated by an extensive preview of an event five days away.

If TWIN wants to continue to tweak the format, they need to look no further than the veteran personalities on their set. Byrnes and company have a lot of racing knowledge that does not need fancy editing or pre-recorded interviews. It was nice to see this show go on location, but fans deserved a little more spontaneity and a little less controlled agenda.

The Daly Planet welcomes comments from readers. Simply click on the COMMENTS button below and follow the easy instructions. The rules for posting are on the right side of the main page. Thanks for taking the time to stop by.
Posted by Daly Planet Editor at 8:13 PM 42 comments: 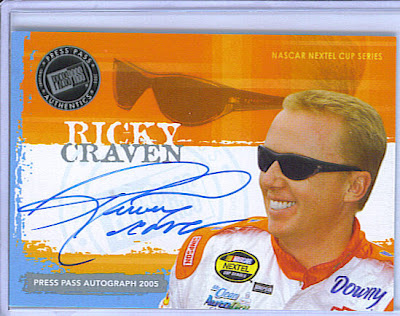 There have been other Cup-level drivers on NASCAR Now this season, but the program found a winner in Ricky Craven. The New England native has not been seen on TV for some time now and the Bristol, CT studios of ESPN was a good place to select for a return.

This Monday show has always relied on the chemistry of the rotating panelists to either be very good or just kind of average. The challenge on this day was for host Allen Bestwick to combine the personality of Craven with that of Cup owner Ray Evernham and ESPN veteran Mike Massaro.

It was clear from the start that Craven was up-to-date on his NASCAR news and personalities. Evernham blended well with Craven, and gave him plenty of room to talk about driver-related issues. Massaro was once again focused on contributing the reality of what happened at the track on the weekend and the most recent news.

A review of both the Sprint Cup and Nationwide Series races proved to be revealing in terms of the opinions of the panel about Kyle Busch. Craven clearly loves his style and attitude. Evernham continues to be amazed that Busch has only one speed and one way of driving. Massaro enjoys the fact that this "misfit" has upstaged the regularly featured top drivers.

Bestwick did a whole lot of talking in this show, and his questions have grown to sometimes be paragraphs in themselves. A while back, he would simply throw-out a topic for discussion and then let the conversation flow. Now, he wants specific answers from the three panelists to an issue that he has selected.

This may well be the response of a veteran TV host to the constantly-changing cast of characters that Bestwick hosts each Monday. The rotating cast used to feature ESPN announcers, but now viewers have seen several current and former Cup Series drivers on the program. Some have worked out very well, others have proven to be less than TV-friendly.

Once again, the features edited by both the NASCAR Media Group and the NASCAR Now staff contributed quite well to the program. This mix of several pre-produced features inserted into the show in a timely fashion makes for just enough of a change of pace to keep the hour interesting.

Craven appeared on-the-air to be a veteran TV professional. He acknowledged the opinions of his fellow panelists on a regular basis and called them by name when following-up on their comments. For NASCAR Now viewers who have been dealing with the disjointed comments of ESPN analyst Boris Said, Craven would be a welcome addition on this TV series during the week.

The Monday "roundtable" has started to insert a weekly guest, and this week David Ragan was interviewed by satellite. The former struggling driver has finally found his rhythm, and spoke about both Darlington and his current Top 12 status. Once again, only Bestwick was allowed to interview the guest. This practice is tough-to-take when a panelist like Ricky Craven is seated on the studio set.

Bestwick took the time to remind viewers that Evernham had picked Ragan as a driver to keep an eye on as the season progressed. Both Massaro and Craven added to that opinion with their veteran perspectives. Craven's comments were especially pointed about the personal and professional transformation of Ragan.

The panel capped the program with a candid talk about the upcoming All-Star weekend in Charlotte. Craven laughingly said the race is a "recipe for disaster." Evernham admitted to testing illegal equipment during the race and actually having one car later banned by NASCAR. Massaro, as the reporter, was only interested in following-up on Evernham's on-track "testing."

This was a classy touch for NASCAR Now to promote the All-Star weekend which is essentially exclusive to SPEED. If one thing has been noticeable this season, it is the on-air cooperation of the NASCAR TV partners in putting the sport before the network and promoting the racing regardless of where it airs.

Craven proved to be one of the most TV-friendly panelists on NASCAR Now this season. One wonders what an episode of this show would be like with Craven, Andy Petree and Mike Massaro. Hopefully, the NASCAR Now executives will return Craven to this program, and possibly consider some additional exposure for him on other editions of this show.

The Daly Planet welcomes comments from readers. Simply click on the COMMENTS button below and follow the directions. The rules for posting are on the right side of the main page. Thank you for taking the time to drop by.
Posted by Daly Planet Editor at 5:26 PM 17 comments:

For those of you who ask about TV ratings, here is the official information that the Sprint Cup race from Darlington in primetime beat the other programs on the broadcast TV networks that night.

CBS placed second with an average 5.8 million viewers for a "CSI: Miami" repeat, a "Criminal Minds" rerun and a new "48 Hours Mystery."

ABC attracted 4.5 million with the NBA playoffs (Cavaliers vs. Celtics) and NBC came in fourth among the broadcasters with 4.1 million viewers for reruns of "Medium," "Law & Order: Criminal Intent" and "Law & Order."

I would guess that those 1PM Sunday start times are going to be a thing of the past.

The Daly Planet welcomes comments from readers. Click on the COMMENTS button below. The rules for posting are on the right side of the main page. Thanks for stopping by.
Posted by Daly Planet Editor at 1:36 PM 3 comments: