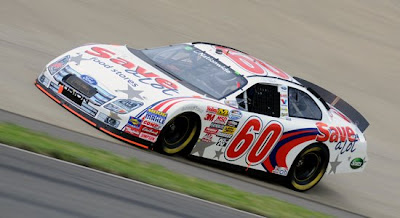 Fans of this series for the past several years know that races like the one this Saturday in Nashville are few and far between. Rarely does the Nationwide Series get to be alone in the spotlight.

Normally, the entire Nationwide Series TV presentation is a smaller slice of the Sprint Cup Series with some backmarkers thrown in for good measure. The TV focus is on the Cup drivers and the racing often resembles "Cup drivers unplugged."

Somehow, the big guys can let down their hair and just race for fun when it's on Saturday. The pressure is off, the field is thinner and there is no Chase to make down the road.

Friday in Nashville, ESPN unveiled the network's interactive approach to practice. Basically, it gave the producer a license to continue to avoid what was really happening on the track unless it involved a chosen driver or storyline. The ESPN2 coverage was strangely twisted toward tech features and additional content that did not follow the real story of what was actually going on in the session.

ESPN2 returns at 11AM Saturday with qualifying coverage. There are 48 cars trying to make the field and they range from big names with powerhouse teams to rookies with backyard efforts. Certainly, the stories are within the cast of characters who will take to the track.

In the past, ESPN has surrounded the car actually qualifying with electronic graphics on the TV screen while offering other interviews and content in a second video box. The thrust of the coverage is not really focusing on the qualifying laps themselves, but continually talking about the network's chosen topics.

For TV viewers, the clash in styles between SPEED and ESPN where qualifying coverage is concerned could not be greater. SPEED makes an effort to show every car's attempt and follows the efforts of the teams equally. ESPN puts the emphasis on the Cup drivers and avoids putting time and effort into the other competitors.

The actual race airs at 3PM on ESPN, with Allen Bestwick and Brad Daugherty kicking things off from the Infield Pit Center. Tim Brewer is in his Tech Center while Marty Reid, Rusty Wallace and Andy Petree will call the race. ESPN has done a very good job of covering the Nationwide races with a stripped-down broadcast that has put the focus back on the on-track action.

It should be interesting to see how the TV team approaches qualifying and the race this Saturday. This post will serve to host your comments about the TV coverage from Nashville. To add your TV-related comment, just click the comment button below.

TDP is a family-friendly website, please keep that in mind when posting. Thank you for taking time on this holiday weekend to drop by The Daly Planet.
Posted by Daly Planet Editor at 10:30 PM 117 comments:

ESPN Gets Interactive Friday and Saturday 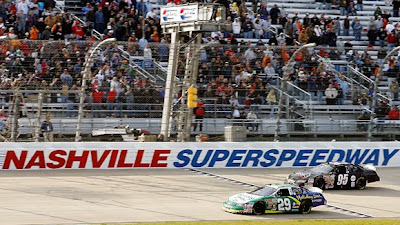 The question of what to do with a stand-alone Nationwide Series race on Easter weekend is a good one. ESPN2's answer is to get interactive from the Nashville Superspeedway.

There are 48 cars that will be practicing on Friday at 6PM when Marty Reid, Rusty Wallace and Andy Petree are on ESPN2. The names of the drivers range from Kyle Busch and Carl Edwards right down to Benny Gordon and Ryan Hackett. The mix of teams and cars on the track should make things interesting, even in practice.

Click here for the direct link to send your questions to Wallace and Petree. Fans can do this in advance and also during the qualifying session. Reid is a TV veteran who has done everything from call the Indy 500 to hosting NASCAR Now in the studio. He should be able to keep things moving quickly and focus on the email from the fans.

Since things are a little bit different this weekend, it should be a good opportunity for fans to get interactive with a veteran TV team. There will no doubt be plenty of issues to talk about both with the Nationwide Series and other NASCAR topics.

The same announcers move to Saturday morning for the live qualifying at 11AM ET. This should be quite an affair with teams trying to break into this high-profile stand-alone race and get themselves on TV for exposure and sponsors.

The interactive element returns later on Saturday. Click here for a direct link to ask a question of the Nationwide Series in-race reporter, Justin Allgaier. It will be 3PM when Allen Bestwick and Brad Daugherty host the pre-race show for the race that takes the green flag about an hour later.

Allgaier is an up-and-coming driver who handles the pressure of this level of racing very well and may soon be headed for bigger challenges. It should be interesting to hear him answer the viewer questions before and during the event. Nashville is known for frequent caution periods, so Allgaier should get lots of air time.

This is the only NASCAR race of the weekend, so ESPN will play it back on the ESPN Classic Network at noon ET on Sunday for those who missed the live Saturday airing.

This post will host your comments about the live Friday interactive qualifying session. Please let us know if your question was used on the air and feel free to discuss the ESPN coverage. Just click on the comments button below. This is a family-friendly website, please keep that in mind when posting.

Thank you for taking the time to stop by The Daly Planet.
Posted by Daly Planet Editor at 5:00 AM 37 comments: