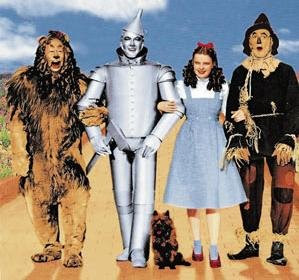 It's primetime and it's Halloween, what is a TV network to do? If you are the Craftsman Trucks Series TV team from SPEED, the answer is absolutely have a blast.

The Texas Motor Speedway has been a great track for the trucks and Friday night on SPEED began with Krista Voda and The Set-Up pre-race show. Confirming that they are very good at keeping a secret, Voda was picture perfect in her costume as the Wicked Witch of the West.

This was the perfect tension reliever for NASCAR fans at this time of the season. Voda really puts things in perspective and she set a tone for the pre-race show that put fun before racing for just a little while.

Nothing, however, could prepare viewers for what was to follow. Topping all NASCAR TV moments for 2008 was the appearance of Ray Dunlap and Adam Alexander, the SPEED pit reporters.

To say that Dunlap made a great Dorothy was a bit of a stretch. The ruby slippers were in place and the dress was great, but Dorothy's moustache was a bit of a gender-bender and Toto appeared to be...well...stuffed.

Adam Alexander is the newest member of the SPEED team and he may have cemented his place in TV history with his appearance as Glinda the Good Witch. It was not so much the beautiful dress or the outstanding hairstyle. No, it was Glinda smooching with Truck Series driver Todd Bodine that put this right over the top on the hilarious scale.

The one trademark of the Craftsman Truck Series drivers is that they have been good sports and always cooperative with SPEED. Dorothy and Glinda interviewing tough guys like Ron Hornaday Jr. and Max Papis made the entire segment one that might live for a very long time in the SPEED archives. You can bet it will be on NASCAR in a Hurry on Sunday morning at 9:30AM.

Now, it was time to get back to real racing talk and The Wicked Witch ended the fun and sent it up to Rick Allen in the broadcast booth to get things back on track. Along with Allen were TV and NASCAR veteran Phil Parsons and current Sprint Series Cup owner/driver Michael Waltrip. Did I say end the fun?

Playing it to the hilt, this trio instead continued the pre-race theme with Allen as the Tin Man, Parsons as the Scarecrow and Waltrip as the Cowardly Lion. As the emails and comments began flying around the Internet and the phone began to ring off the hook, it was clear NASCAR fans were enjoying every minute of the fun.

Kudos to SPEED for pulling this off with no advance warning and nothing leaking out to the media. It was a perfect time for a little fun and when it was done the racing coverage was again first rate. The truck package has been tested this season and has proven to be solid from top to bottom.

SPEED focused on the racing, kept the championship battle in perspective, and followed the stories as they unfolded. Allen calls a good race and with Parsons and Waltrip finally settling into a complementary relationship, the results have been super.

It is clear that both Dunlap and Alexander have a great working relationship with the teams and drivers in the series. Both during and after the race, these two reporters cover more than thirty teams and stories in a multi-hour live TV telecast. Perhaps, SPEED will pitch-in some additional funding and let Voda become the third pit reporter for next season now that Camping World is on-board.

A good post-race show wrapped-up the telecast and once again reminded viewers that NASCAR personalities like Ron Hornaday Jr. and Johnny Benson are a couple of the reasons fans have been boosting the ratings of this series in 2008.

There are only two more Truck Series races this season and with the SPEED Cantina opening up at Phoenix International Raceway next week, it might be a good idea to tune-in and see what the TV team has up their sleeve for the next broadcast. Now, excuse me while I try to chase Dorothy and Glinda out of my mind.

The Daly Planet welcomes comments from readers. To add your opinion, just click on the COMMENTS button below and follow the easy instructions. The rules for posting are located on the right side of the main page. Thank you for taking the time to stop by.
Posted by Daly Planet Editor at 10:48 PM 30 comments: 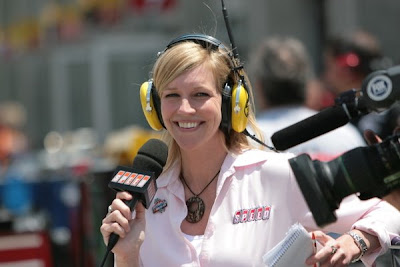 It's Friday night and time for the Trucks on SPEED. This should be quite a show under the lights on a track that is getting faster and faster as the sun goes down.

Krista Voda will kick things off at 8:30PM with The Set-Up. This pre-race show will review the tight season championship standings and also deliver all the Truck Series news.

Rick Allen will be along next to call the race. He will be joined by Phil Parsons and Michael Waltrip in the announce booth. Ray Dunlap and Adam Alexander will be on pit road.

SPEED has a very old school approach to this series that consists of minimal graphics and special effects. From Krista Voda standing alone at the head of the starting grid to the focus of the race telecast being on the teams and drivers, this TV product has been solid all season long.

This post will serve to host your comments about the Craftsman Truck Series race from the Texas Motor Speedway on SPEED. To add your TV-related comment, just click on the COMMENTS button below and follow the easy instructions. The rules for posting are located on the right side of the main page. Thanks for taking the time to stop by The Daly Planet.
Posted by Daly Planet Editor at 7:02 PM 136 comments: