Edwards vs. Harvick Might Give TV Ratings A Shove 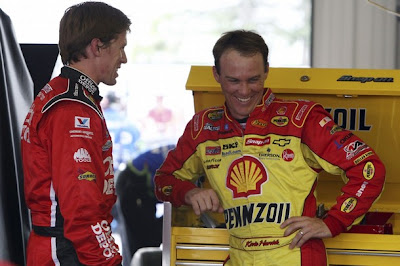 There are 53 Nationwide Series cars waiting to qualify for 43 starting slots on Friday afternoon at Lowe's Motor Speedway. Whether qualifying is rained-out or not, we can expect two cars in the field to be piloted by Carl Edwards and Kevin Harvick.

Sprint Cup Series qualifying has already been rained-out and the starting field has been set by points. Edwards and Harvick will both be there as well.

Even as you read this, the news story of Edwards confronting Harvick, putting hands on him and then ending up in a RV driver headlock is continuing to make its way around the world. As it turns out, the only Thursday action between Chase contenders was off the track.

Friday night ESPN2 gets this unlikely duo in the Nationwide Series race and on Saturday night they are back at it during the Sprint Cup event. Where TV ratings are concerned, ESPN could not be happier.

Regan Smith and his yellow line controversy is just not going to bring more TV viewers to NASCAR. However, reading stories online and in the local papers that two well-known Chase drivers were exchanging profanities and bodyslams might just do the trick.

Harvick's Nationwide and Shell ads run all over the TV and Carl Edwards has been seen on everything from Alias to The Chase is On over on SPEED.

Dr. Jerry Punch and his on-air crew of Dale Jarrett and Andy Petree played it cool on Thursday evening when discussing this incident. Edwards was apparently more dismayed at Harvick's choice of words on TV then he was by his own choice of actions at Talladega. Jarrett and Petree said these things will happen and drivers tend to sort things out on their own.

Of course, ESPN would like to have these two wait to sort things out until sometime after 8PM on Friday night. That would be during the live Nationwide Series race. It should also be very interesting to see how the NASCAR on ESPN crew approaches both drivers during the 3PM Friday coverage of Nationwide qualifying. Which pit reporter draws which driver should make for some memorable TV moments.

While the Craftsman Trucks have seen a ratings increase in terms of households, the total numbers of viewers for that series on SPEED is dwarfed by the Sprint Cup TV exposure. ESPN has seen on both the ESPN networks and ABC that ratings are basically flat this season for their two series. Even a wild Sprint Cup Series race from Talladega got the exact same ratings numbers as last year.

Friday night the Nationwide Series on ESPN2 is going up against the Red Sox playing the Tampa Bay Rays in the MLB playoffs on TBS. Meanwhile, Louisville is playing Memphis in college football over on ESPN. Finally, NBC rolls-out a new Deal or No Deal at 9PM.

On Saturday, the Sprint Cup Series moves over to ABC for the 7:30PM race telecast. Right next door on CBS is Florida playing LSU in a very big college football game. It might not surprise anyone to know that ESPN and ESPN2 are both going to be in live college football as well.

This is the tough TV environment into which Punch, Jarrett and Petree must wander on two consecutive nights and find a way to make viewers tune-in and more importantly, stay tuned-in. When they talk about big time TV pressure, this is it. The only remaining night race, a Chase event and in the middle of an on-going economic mess.

TV crews are like NASCAR teams, they either band together and put it all on the line for each other or slowly dissolve into small groups of special interests. ESPN will have eleven voices on-the-air, top flight facilities and a good track for racing.

How the NASCAR on ESPN team emerges from this weekend will probably set the tone for the rest of the season. Just like some drivers who are racing for a ride, there may also be some folks who are going to be working hard to keep their TV slot intact for 2009. It might not only be the racing that gets intense.

The Daly Planet welcomes comments from readers. Simply click on the COMMENTS button below and follow the easy instructions. The rules for posting are located on the right side of the main page. Thanks for taking the time to drop by.
Posted by Daly Planet Editor at 8:23 PM 57 comments: 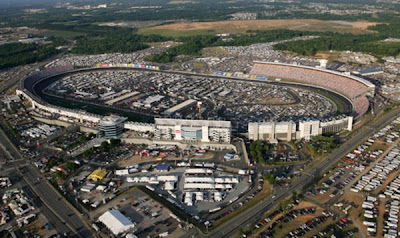 Update #3 - This whole Harvick and Edwards scuffle is still sorting itself out. NASCAR Now reported it with Marty Smith. It was mentioned at the head of the 6PM coverage as well, but not the 7PM scheduled qualifying show. If you have comments on the TV coverage of this story, post them below.

Click here for the link to the ESPN story on this subject.

Update: Legendary NASCAR photographer T. Taylor Warren has passed away at the age of 83. Click here for the story. Warren was featured on an edition of NASCAR Confidential while he worked the Daytona 500 weekend. Expect the NASCAR TV shows to pay their respects.

Things are a bit different this week with the Lowe's Motor Speedway races happening on Friday and Saturday night. Practice and qualifying sessions on Thursday will be split between SPEED and ESPN2.

It was a last minute move to add live TV coverage of the Sprint Cup Series that brought SPEED to the action on Thursday. It will be 3PM when Steve Byrnes leads the team of Larry McReynolds and Jeff Hammond on the air. Reporting for SPEED from the garage area will be Wendy Venturini and Bob Dillner. Coverage will consist of ninety minutes of live Sprint Cup Series practice.

Next-up is NASCAR Now on ESPN2 at 5:30PM hosted by Ryan Burr. Nicole Manske will be reporting from the track on all the news of the day.

At 6PM coverage on ESPN2 shifts back to the track for Nationwide Series practice. Dr. Jerry Punch, Dale Jarrett and Andy Petree will call the action.

The featured event of the evening will be Sprint Cup Series qualifying at 7PM also on ESPN2. Shannon Spake, Jamie Little, Dave Burns and Mike Massaro will be handling the interviews and reporting from the garage area. Tim Brewer will be in the Tech Center.

This post will serve to host your comments about the Thursday TV coverage on ESPN2 and SPEED. To add your TV-related opinion, just click on the COMMENTS button below and follow the easy instructions. Thanks for taking the time to stop by The Daly Planet.
Posted by Daly Planet Editor at 1:00 PM 35 comments: 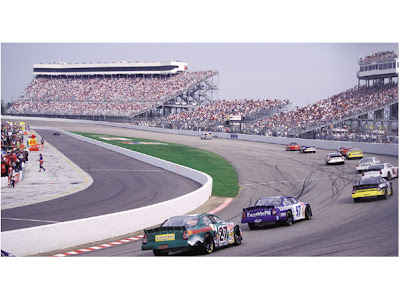 The issue of where to see the Nationwide Series race from Memphis has been solved. The solution is rather familiar. SPEED has once again agreed to carry a NASCAR on ESPN telecast so fans can catch-up with the action from Memphis. Here is the official information.

The Kroger on Track for the Cure 250 presented by the Southern Dodge Dealers will be simulcast live on ESPN Classic and SPEED. Online broadcasts of the race will also be streamed live on ESPN360.com and NASCAR.com.

“The simultaneous broadcasts on SPEED and ESPN Classic, along with live streaming on NASCAR.com and ESPN360.com, will provide our fans with a wide range of opportunities to watch the race on various platforms,” said Robbie Weiss, NASCAR’s vice president, broadcasting. “This is a busy time of year for live sports and we really appreciate ESPN and SPEED working together to come up with a plan that takes care of our fans. ESPN and SPEED will work aggressively to promote this simulcast."

“SPEED is happy to assist again with a simulcast of a NASCAR Nationwide Series race,” said SPEED President Hunter Nickell. “SPEED works well with the NASCAR television partners all season long and believes this kind of network cooperation is in the best interest of NASCAR fans and SPEED viewers.”

This was a tough situation to solve and ESPN deserves credit for the hard work. The company is loaded with college football and on this particular Saturday also has live coverage of the Breeders Cup. This left SPEED as a viable solution and network president Hunter Nickell has a great track record of helping NASCAR in difficult situations.

There will be an update on this next week after the events at LMS are over. To add your comments on this topic, just click on the COMMENTS button below and follow the easy directions. The rules for posting are located on the right side of the main page. Thanks for taking the time to stop by.
Posted by Daly Planet Editor at 11:17 AM 18 comments: