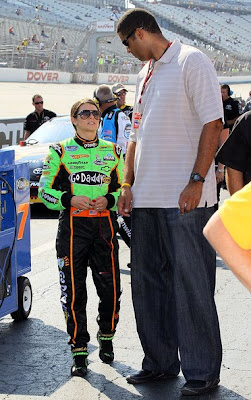 On a weekend where three races dominated the headlines, a little blurb of TV news still has NASCAR fans and media members talking.

Jack Roush answered a post-race question in Iowa about tension between star driver Carl Edwards and young gun Ricky Stenhouse Jr. in the Nationwide Series. Roush said he would control it this season, but next year it would not be an issue.

When veteran reporter Bob Pockrass from scenedaily.com contacted ESPN, the network spokesman said he had "nothing to announce" about the topic at this time. That's a pretty good indication that Roush was right on the money.

When ESPN opens each season with the Nationwide Series race in Daytona, the network has eleven on-air voices. Three announcers are up in the TV booth and four reporters are on pit road. There is a host and two analysts in the infield studio and of course, Tim Brewer in the Tech Garage.

During the season when one on-air personality takes a vacation there is simply a little switch of roles and the show goes on. Since 2007, ESPN has built up a group of approximately twenty on-air talent who work on race telecasts.

Last weekend was a great example of the depth of personalities. Marty Reid, Ricky Craven and Kenny Schrader worked the Iowa race with Jim Nobile, Rick DeBruhl and Shannon Spake on pit road.

All of this raises a very interesting question where Roush's recent Iowa remarks about Edwards are concerned. It's not likely that ESPN is going to put four men in the booth, use Edwards as a fifth pit reporter or squeeze a fourth person into the infield studio.

The bottom line is that in order for Edwards to join the team, someone has to go.

It's very doubtful that Dale Jarrett will be moved from the booth. Jarrett and Bestwick are ESPN's NASCAR TV future for the next several years. The other former driver on the team, Wallace, just had his contract extended by ESPN until 2014.

Petree and Brewer both bring to the table a veteran crew chief perspective that Edwards lacks. That leaves only one person in the mix. Is Daugherty the odd man out for ESPN next season?

It's been an awkward TV role for Daugherty since Bestwick christened him the "Voice of the fans" years ago. Daugherty is a cheerleader for the sport who speaks in politically correct generalities. Since he became a Sprint Cup Series owner, his comments are even more generic and his role has lessened.

Daugherty came to this NASCAR on ESPN TV package with an agenda. He and NASCAR chairman Brian France co-founded NASCAR's Diversity Council several years ago.

"Brian said to me that the cultural impact of this is huge and I think that's what intrigued me the most," Daugherty told NASCAR.com in 2006. "I thought that if I don't step up and take this opportunity, who will? It probably wouldn't be another African-American. So I felt some responsibility as well as being a big racing fan who loves the sport."

ESPN has spent the last four seasons featuring the Nationwide Series until late July when the network's Sprint Cup Series coverage begins. Shortly after that, the Nationwide telecasts are unceremoniously sandwiched between two college football games in a timeslot that usually guarantees the pre-race show will never see the light of day.

Suddenly, the series gets lip service from disinterested announcers on a TV network completely in a stick-and-ball frenzy over college and pro football. Since 2007 the Nationwide Series has been thumped over the head with a TV hammer by ESPN from September through November. It's affected the sponsors, the ratings and the sport in general.

Arriving at Daytona in 2012 along with Carl Edwards will be Danica Patrick and Travis Pastrana. The Nationwide gang is betting on Patrick and Pastrana to bring the media focus back to a series that has long been ignored by TV networks, including the one telecasting the races.

It should be fascinating to see how ESPN positions Edwards for Daytona and if a member of the existing on-air team steps aside to make room for him. Once Edwards puts on his TV hat, it will also be interesting to see how Nationwide Series drivers, team owners and TV viewers react to his opinions and analysis.

As an ESPN NASCAR analyst, Edwards will still be a full time Sprint Cup Series driver who is closely associated with one manufacturer and employed by a major team that continues to race in the Nationwide Series. That's a tough sell.