NASCAR Banquets In Las Vegas A TV Topic Once Again

It is a lot of fun when the Sprint Cup Series stops-by Texas, Charlotte or Las Vegas. Along with some good racing there is also usually national media coverage of the President of SMI, the one and only Bruton Smith.

While many of his "ideas" seem to be tied directly to the growth of his own corporation, this week Smith has once again raised an issue that many fans have strong feelings about. That is the post-season NASCAR banquets.

There are three national touring series that have nice big contracts with four TV networks and two radio broadcasters. Their product is also distributed directly to homes by satellite dish technology, and races are made available live on the Internet. ESPN International distributes the racing all over the world as well. NASCAR TV is everywhere.

The climax of each of these series is a dramatic final race, and when it is over there are lots of stories to tell and issues to follow-up on in the media. However, once the crowds and teams clear out of the racetrack, there is suddenly an empty feeling for fans.

NASCAR TV comes to a screeching halt after the last race. Following the same-day or same-week recap shows, there is a big black hole until mid-January that no network wants to fill. The only activity for fans is to watch the post-season celebrations of each series that are still done in the traditional banquet style.

Right now, the Truck, Nationwide and Cup Series banquets are held in three separate locations and produced by different TV networks. The results of all three last season were not exactly what viewers had hoped to see. Everyone put in a good effort, but the TV programs and the media exposure were not up-to-par.

NASCAR is building a Hall of Fame complex in Charlotte, NC. The rumor is that the Truck and Nationwide Series banquets would move to that location. NASCAR continues to insist that the Sprint Cup banquet will remain in the strangest of all places, New York City. Anyone who has gone to You Tube and watched the videos of the "media activity" and the parade surrounding the banquet can only come away with one thought. Something has to change.

Freezing drivers surrounded by uninterested New Yorkers walking to their Manhattan jobs in the cold did not make for the best PR for NASCAR. In fact, Jimmie Johnson did a TV feature piece earlier this season about the fact he and Jeff Gordon enjoy New York City because no one knows who they are. Those words came out of the mouth of the current Cup champion.

While being interviewed in the Las Vegas Speedway Media Center, Smith once again renewed his call for all three banquets to be moved to Las Vegas. The synergy of putting all the crews and drivers in one location along with their sponsors is a dynamic that is hard to beat.

Vegas could easily take care of NASCAR and also support any other activities that might be tied to such an event in the future. It that is a trade show, a fan celebration or even a big final TV special, it would seem that Vegas is the place.

Stepping away from Manhattan is driven by two issues. One is the cost and the other is the lack of the very media attention that NASCAR first desired by going there.

The same newspapers and magazines that originally drove the end-of-season exposure for the sport have now transitioned to Internet-based media properties. The cost of Manhattan has also driven away the local station reporters who used to follow the sport to the Big Apple.

What is left is a neat little package totally controlled by NASCAR that puts copyrighted pictures and pre-edited video out as an end result. The only problem is, who uses it? Is all this effort worth a ten second clip on local TV stations?

Brian France called for a very basic shake-up of the sport after the TV troubles and bad ratings of 2007. ESPN and SPEED responded by throwing all kinds of TV and Internet resources at the sport and have pushed NASCAR into the season with solid momentum, despite the fiasco in California. Good TV drives this sport, and right now NASCAR has it.

If there was every a time to allow Las Vegas to take a shot at hosting all three banquets over a weekend, this it it. Bring the fun back and let the sponsors be celebrated in a modern and tech-savvy way that includes the fans. Open the doors to live video feeds, consider a live PPV program and create for SPEED an opportunity to become the destination for the post-season just as they have become the TV destination for the pre-season.

At the very least, setting up an informal committee to study what can be done and what Las Vegas has to offer will surely not upset any New Yorkers. NASCAR maintains that they had over one hundred thousand people at their "parade" in Manhattan.

One look at the videos from You Tube and other providers will change that opinion very quickly. New York has no love for this sport, and never will. Whatever NASCAR decides there is one thing for sure, all three banquets need help. What better time to respond than right now, as Mr. France himself has opened the door to changes that can positively affect the sport.

The Daly Planet welcomes comments from readers. Simply click on the COMMENTS button below and follow the easy instructions. The rules for posting are on the right side of the main page. Thanks again for stopping by.
Posted by Daly Planet Editor at 3:00 PM 30 comments:

Saturday at 4PM Allen Bestwick will kick-off ESPN2's coverage of the Nationwide Series race from Las Vegas with the NASCAR Countdown pre-race show.

TV viewers should be on their toes, because there is a live college basketball game directly before this show, beginning at 2PM. Although nothing is official, we have seen NASCAR Countdown begin on the ESPN Classic Network if a live event was still in-progress on ESPN2.

Bestwick will be joined by Dale Jarrett and Brad Daugherty in the ESPN Infield Pit Center for the program. Immediately following this thirty minute show, Jerry Punch will host the ESPN2 race coverage, with Jarrett and Andy Petree alongside. On pit road will be Mike Massaro, Dave Burns, Shannon Spake and Jamie Little.

This race is scheduled to air in a three hour timeslot, ending at 7:30PM. Hopefully, that will allow some time for a solid post-race show.

This page will serve to host your comments about the Nationwide Series race from Las Vegas on ESPN2. To add your comment, simply click on the COMMENTS button below and follow the easy instructions. The rules for posting are on the right side of the main page. Thanks for taking the time to stop by The Daly Planet.
Posted by Daly Planet Editor at 2:02 PM 96 comments:

"Trackside" On SPEED: Love It Or Hate It? 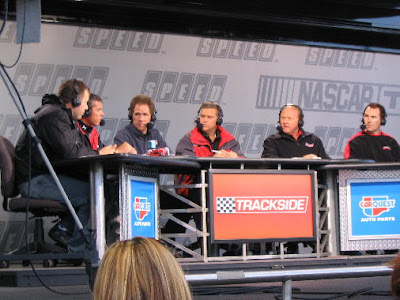 I am getting a lot of email about the Trackside program from last night featuring Kyle Busch. Readers either think this show is the best thing since sliced bread or believe that it shows-off everything that is wrong with the sport.

How do you feel? This one hour show takes place every race weekend on Friday night and features Steve Byrnes as the host. Darrell Waltrip is alongside for the Fox portion of the TV package, and is joined by both Larry McReynolds and Jeff Hammond.

Normally, there are one or two guests from the NASCAR world and the conversation is a mix of the serious and the hilarious. Friday night, a much more mature Kyle Busch was on-hand to talk with the panel and answer some good questions.

While this show is always walking the "NASCAR line," there have been some very good conversations with a lot of NASCAR personalities over the years. Byrnes has an upbeat style of hosting that ruffles some folks, but he makes it clear that he is not going to take racing too seriously.

Waltrip is always interesting, in his own way. Caught-up in all kinds of conflicts of interest, DW is almost always going to get himself into hot water one way or another. In this show, he has been fun and focused and interested in the guests. He has also been self-serving and sometimes way off-base with some comments.

McReynolds is the target of good-natured grief from Byrnes and Hammond all season long, and that does seem to wear thin after a while. No one is more focused on this sport and a better ambassador of all things NASCAR than McReynolds.

I have always enjoyed this program series, and took it as a fun SPEED show from the track that featured drivers and casual conversation. Other seem to believe that it serves to promote the NASCAR agenda, and even twists reality to what NASCAR wants fans to believe. That is a good conspiracy theory.

If you have some thoughts on Trackside, let us hear them. It might be interesting to get some samples of what NASCAR fans and casual viewers see when they watch this fast-paced hour of raucous conversation. To add your comment, just click on the COMMENTS button below, and thanks for taking the time to stop by.
Posted by Daly Planet Editor at 10:20 AM 26 comments: