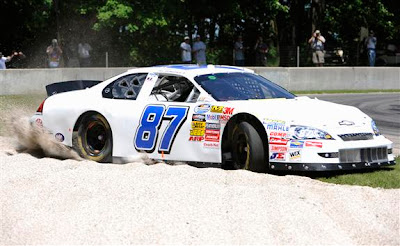 Saturday is going to feature some interesting TV from of all places, Wisconsin. The Road America race course in Elkhart Lake is playing host to the Nationwide Series.

ESPN2 chose not to cover the practice or qualifying sessions. This means that fans are going to get their first and only peek at the NNS cars on this monstrous four-mile road course layout during the actual race.

Allen Bestwick is going back to his roots with ESPN on this telecast. In his early days, Bestwick handled hosting the NASCAR Countdown pre-race show and then called the races for the stand-alone Nationwide Series events. Saturday afternoon at 3PM, he will do that once again.

Dale Jarrett is off, so Rusty Wallace will be joining Bestwick for the telecasts. There is no Brad Daugherty this week, so Andy Petree will also wear two hats. Down on pit road will be Dr. Jerry Punch, Jamie Little and Mike Massaro.

Massaro has spent most of this season doing his best Bestwick impression. Massaro is one of two fulltime hosts of NASCAR Now. In this role, he hosts from the studio and also travels to races as a reporter for the daily series. Fans have also seen Massaro breakout the old firesuit and fill the role of a pit reporter during select live races.

Bestwick seems to be very excited about this event. His enthusiasm makes it even tougher that ESPN and NASCAR could not get together to get at least the qualifying televised or streamed online. A lot of good and very unique NASCAR content was left on the table.

Road America came late to the schedule, replacing yet another racetrack having financial troubles. The layout features the kind of gravel traps primarily made for lighter and perhaps faster vehicles. There is little doubt that several of the NNS cars will bring out a full course caution after being "beached."

The race gives ESPN and the BSI group an opportunity to break-out the "foot-cams" on several of the drivers. Once again, this is the type of content that would work well in a RaceBuddy style online application for fans. It would allow the main feed to follow the racing while allowing fans to really see the skill it takes to handle these cars on a big road course.

Bestwick is a solid professional, while Wallace has been up and down this season. Personal feelings have always interfered with the way Wallace presents himself on the air. Anger is never more than a moment away and it's not hard for veteran fans to see through some of the smokescreens Wallace tries to set-up.

Since 2007 Petree has been ESPN's forgotten man. Flying under the radar, he has dealt with trouble in the TV booth that has meant a new play-by-play announcer and a new lead analyst. Through it all, Petree has delivered consistent and informed commentary that features a healthy perspective on the sport.

We will use this post to host your comments before, during and after the Nationwide Series race on Saturday afternoon from Road America on ESPN2. To add your comment, just click on the comment button below. This is a family-friendly website, please keep that in mind when posting. Thanks for stopping by!
Posted by Daly Planet Editor at 12:01 AM 155 comments: