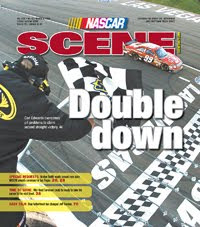 There was a time when official NASCAR publications were a lifeline for young fans like me. Before live races were regularly televised. Before cable TV existed. Before cell phones, the Internet and satellite radio.

Originally called Grand National Scene when it was started back in 1977, it grew to become the nation’s largest weekly publication devoted exclusively to NASCAR’s top three touring series. It was a wonderful weekly update on what was going on at the top of the heap.

Three decades later, things have changed. Motorsports newspapers and magazines are defenseless against the relentless technology onslaught based around the Internet. Instead of pictures from last week's race, the iPhones of team PR reps send fans pictures of their favorite drivers while the race is still in progress.

Tweets from NASCAR itself, most of the teams and endless racing websites now scroll by in real time giving us sometimes too much information about the sport. Last season, drivers like Juan Pablo Montoya, Kevin Harvick, Denny Hamlin and others added to the technology mix with their candid comments made directly to fans on Twitter.

Like many, I no longer have any subscriptions to print publications about the sport. Technology has changed my expectations where NASCAR is concerned. When I look for information, I want it now.

Just as we have seen with other motorsports writers across the country, change came to Charlotte and the NASCAR Scene family on Tuesday.

All in all, slightly less than 30 employees of NASCAR Scene and NASCAR Illustrated were released by the Street and Smith Sports Group. Jim Utter from the Charlotte Observer advised that one main website will emerge from the rubble, blending the content of scenedaily.com and NASCAR Illustrated. The actual publications are rumored to be ceasing operation.

Update: Told scenedaily.com will continue, along with the monthly magazine, NASCAR Illustrated. The NASCAR Scene weekly newspaper looks to be the casualty.

Still employed are familiar names like Bob Pockrass, Jeff Owens and Kenny Bruce. Expect their content to be shared across the various websites owned and operated by Street and Smith, including the Sporting News. A major revamp of the company, including the various sports properties, is sure to follow. A move like this was not preceded by a successful operating year. Things are tough and this is the result.

It seems ironic that many NASCAR fans had just discovered some of the now unemployed journalists through Twitter. Jeff Gluck hosted pre-race "tweet-ups," a meeting of race fans at almost every track. You may remember NASCAR Chairman Brian France attending one. Steve Waid chimed in with his veteran perspective and Mike Hembree put his sense of humor on display. What seemed to many as a golden opportunity to watch journalists talk about the sport is now gone.

Ultimately, paying the bills drives the bus. The challenge for Street and Smith is to determine the best Internet and social media strategy for 2010 NASCAR coverage and set about putting it into motion. Competing with the likes of ESPN, Fox and Turner is not going to make that an easy task.

While there are lots of bloggers out there like us, this situation did not occur as a result of interested fans or amateur reporters flooding the Internet with NASCAR opinions. This exact dynamic has affected print publications from the New York Times to Reader's Digest. The technology struggles of print publications have been well documented.

We have been fortunate enough to become friends with many of those who now join other motorsports journalism veterans in redefining their media careers. We will keep TDP readers up to date with the information on those involved in the Tuesday changes.

Please feel free to express your opinions on this topic. Just click the comments button below to add your thoughts. This is a family-friendly website, please keep that in mind when posting. Thanks for taking the time to stop by TDP.
Posted by Daly Planet Editor at 12:55 AM 28 comments: