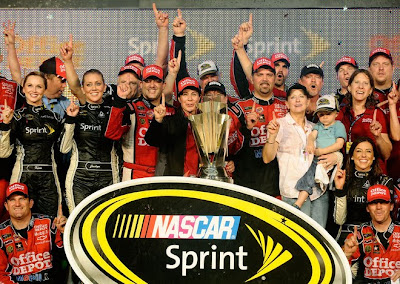 Sometimes, the reality matches the script. ESPN could not have asked for a better scenario than the battle between Carl Edwards and Tony Stewart for the Sprint Cup Championship.

Nicole Briscoe hosted a pre-race show that featured both contenders in the pit studio. Rusty Wallace and Brad Daugherty were joined by ESPN reporter Marty Smith for a portion of the hour.

Features were mixed with interviews. ESPN paid a lot of attention to Jimmie Johnson, a driver the network romanced for many years. While Edwards is an ESPN favorite, it is no secret that Stewart does not enjoy ESPN's approach to the sport.

The race was called by Allen Bestwick, Dale Jarrett and Andy Petree. Early on, Kurt Busch exploded his transmission and a piece punctured the radiator of Stewart. Despite many camera views, ESPN did not have a replay.

This got the team off-balance as hyper-tight shots returned and ESPN was plagued by caution flags happening in commercial break. Since the Nonstop format did not start until halfway, there was a lot of replays used to show viewers what was going on.

Dr. Jerry Punch, Jamie Little, Dave Burns and Vince Welch got a chance to do some bonus interviews when a red flag stopped the race for a rain shower. Despite the fact that almost all of the ESPN personalities are on Twitter, there was no interaction with fans during the delay.

The restarts resulted in some wild action that ESPN followed with aerial shots and wide camera shots for one or two laps. Then, the familiar pattern followed of showing only one or two cars in the camera view at a time. Incidents were replayed and the announcers often sounded frustrated when what they were describing was not what viewers were watching.

With under 100 laps to go, another caution for rain scattered the field and put distance between Edwards and Stewart. Bestwick is a master at working through those kinds of issues and took his time to explain who was where and why. This is exactly the problem the network had with Marty Reid.

Edwards and Stewart both had radio contact with ESPN. Jarrett was outstanding in keeping his conversations short and to the point. Gas mileage became an issue and it took a lot of talk to figure out what was actually going on.

NASCAR really needed a fresh and new storyline and it was delivered. This kind of Homestead excitement will attract the mainstream media and get NASCAR exposed on lots of outlets Monday that may not normally report on the sport.

The race restarted with slightly less than 40 laps to go, ESPN got the job done with coverage as the race narrowed down to the top two cars. Ultimately, the action on the track for the first time in a long time pushed any concern about the TV coverage aside. ESPN simply had to follow the unfolding reality.

ESPN made good pictures, great sound and once again delivered a telecast free of technical problems. Early in the race, the network pulled the lower third sports ticker and left it out for the rest of the championship event. There were several special effects tried with special graphics and in-car cameras, but ultimately it was just cameras aimed at two cars fighting for the championship.

The finish line coverage focused on the championship after a solid final lap call from the TV booth. The top three cars were shown crossing the line and sound from both contenders was used. One of the hardest thing in sports broadcasting is knowing when not to talk and Bestwick did a superb job in the moments after the race.

Little interviewed Edwards post-race and Punch handled Victory Lane and the presentation of the championship. It's always awkward, but Stewart finally showed some emotion with Punch in a very open and honest interview the kind that NASCAR just loves. Somehow, the final rain shower made for a fitting ending to a historic day.

We invite your comments on the final Sprint Cup Series race coverage on ESPN. To add your TV-related opinion, just click on the comments button below. Thanks for hanging with us all season, we will be updating every day with NASCAR TV and media information. There are plenty of things about to be announced next week, so check back with us please.