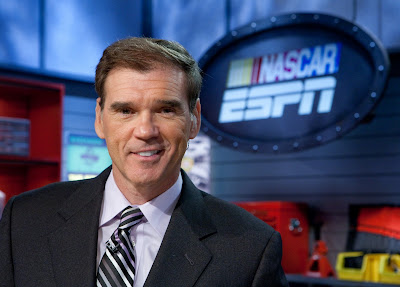 When SPEED released the TV line-ups for 2012 earlier this week, one name that was missing was Ray Evernham. On the racing weekends, Evernham had been driving over to SPEED's North Charlotte studios and working as a NASCAR analyst on the SpeedCenter shows.

This concept was created and Evernham was employed during the time Patti Wheeler was in charge of SPEED's programming and production departments. Wheeler left the network in December amid a senior management shake-up. Now, Evernham has followed her out the door.

SPEED confirmed that Evernham is out and that former Sprint Cup Series driver Ricky Rudd is in. This name came from out of the blue, as Rudd has never been active in NASCAR TV. He has no website, no Facebook page and no Twitter account. Perhaps, that is exactly the kind of "old school" mentality that some fans might embrace.

"Anytime you add someone with Ricky’s credentials, you give the viewers a voice and a perspective that has real impact," said SPEED President Scott Ackerson in a media release.

"I’m really looking forward to the next chapter," said Rudd, the 1977 Rookie of the Year. "It’s going to be a lot of fun working with the gang at SPEED." His first show in the studio with host Adam Alexander will be this Sunday.

Evernham continues to be just as interesting away from the track as he was in his crew chief and owner days. Click here for ESPN reporter David Newton's story on Evernham settling his lawsuit with former partner George Gillett.

In the last paragraph, Newton adds that Evernham has not ruled out a return to TV. We believe that is exactly the case. The buzz is that Evernham will be back on ESPN starting with the Daytona coverage.

"Evernham Issue Getting Tougher" was a TDP column from September of 2008. Evernham's star was rising at ESPN, but there was an issue that remained. It wasn't very hard to imagine what that topic might be.

Many things have changed since February and one of them is now very tough to take. When Evernham is on ESPN, the questions and issues that he deals with involve everything about NASCAR except one topic. That topic is Gillett-Evernham Motorsports (GEM).

Over the last couple of weeks there has been a nasty GEM lawsuit involving Robby Gordon, rumors of GEM buying another race team and also GEM moving to Toyota for 2009. This week, Patrick Carpentier has been told by GEM that he is out at the end of the season. Tuesday, Mike Delahanty, the Sr. Motorsports Manager at Dodge actually jumped-into a NASCAR media conference call to try and quell rumors of problems with Dodge and GEM.

Now with the GEM issue behind him, Evernham's words during a recent interview with veteran NASCAR journalist Steve Waid seem to become even more clear. Click here for the full story. This is an excerpt.

"I still stay away from the motorsports side over at Hendrick Motorsports," Evernham said. "The less I know about what is going on in motorsports there, the easier it is to keep potential conflict out of it in regards to TV. I never want the teams to worry about what I might say on TV after I might have seen what they were working on. The best thing to do is keep that separate."

Out of the pan and into the fire might be a better term. There is little doubt that Evernham's current employment at Hendrick Motorsports is going to be a hot topic in his return to TV. Even with his current involvement limited to the Hendrick Performance (non-racing) side of the business, its sure to raise some eyebrows.

Evernham has lots of irons in the fire including his ownership of East Lincoln Speedway, a car restoration business and a TV project focused on classic cars with his wife, Erin. That means his TV time will probably be limited on the NASCAR beat.

Amid the news about Evernham and Rudd, SPEED slipped in the fact that the network had hired former Miss Sprint Cup Monica Palumbo as a social media reporter. Rather than continue to rely on information from TV personalities sent whenever possible, Palumbo's challenge is to create an information stream on Twitter, Facebook and YouTube that continually offers current NASCAR information to fans.

There you have it. Rudd debuts on SPEED this weekend, Evernham's official announcement of rejoining ESPN is still pending and Palumbo better get a bigger battery for her Sprint phone. As always, we welcome your comments on these topics.

To add your opinion, just click on the comments button below. Thank you for taking the time to stop by The Daly Planet.