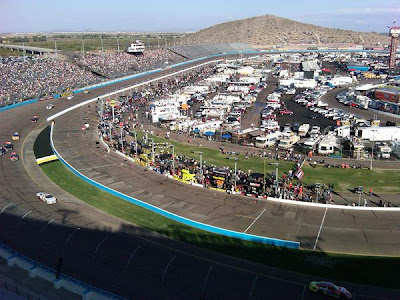 The storyline is going to be the troubles of Jimmie Johnson at the last race. The focus is going to be on the Chase. The same questions will be posed to the same drivers. The challenge for the NASCAR on ESPN gang will be how to generate some interest on this next-to-last pre-race show.

Allen Bestwick has been the best thing that has happened to ESPN's NASCAR coverage in a very long time. Bestwick has taken the Infield Pit Studio and made it a credible and vital piece of the TV coverage for both the Nationwide and Sprint Cup Series.

Sitting alongside of Bestwick this season, Rusty Wallace has been exactly what ESPN wanted him to be. Opinionated, animated and emotional describe what Wallace brings to every race. Paired with Bestwick, Wallace is having the best TV season of his life.

One person who is having a rough year is Brad Daugherty. Other than a goofy feature built around food, Daugherty is pinned in the infield with little to add. This week, Ray Evernham has been added to the panel and will be providing the crew chief perspective to the conversation that should have been there all season long.

Once Bestwick and company are done, they will be passing the ball to Jerry Punch, Dale Jarrett and Andy Petree. Saturday afternoon, Jarrett and Petree worked on an exciting Nationwide Series race with play-by-play announcer Marty Reid. The duo was enthusiastic and opinionated from start to finish.

Now, they face a long afternoon on a relatively short track that provides lots of racing action throughout the field. Keeping up with the action and providing the excitement on this type of track is not a strength of Punch. It will be interesting to see how much Jarrett and Petree cross over and provide help with the call of the race.

On pit road will be the regular ESPN team. Shannon Spake, Jamie Little, Dave Burns and Vince Welch seem to be

Fans know ESPN has overhyped the Chase for the last three years. By focusing on only the Chase cars, the network has alienated the loyal fans of other teams and driven them away from the coverage. This week, stories like Casey Mears starting in the top ten, Michael Waltrip rolling off in eleventh and Max Papis with a great qualifying spot will never be covered.

Pictures from PIR are great. The scenery and the track layout makes good coverage easy to do. This track has a bridge, a dogleg on the backstretch and a wonderful hill behind Turns 3 and 4. Aerial pictures and high cameras show a wonderful scene and a full house would really add to the visuals.

"Points right now" is a phrase that makes lots of fans crazy. Interrupting the racing action to update Chase points is a TV production decision every single time. Perhaps, out of commercial, under caution or even after pit stops makes a little more sense as a time to offer this information.

In many ways, this telecast will tell the tale of ESPN's entire NASCAR season. Next week in Homestead is very different. As the final race, the production and emphasis will be clearly on the Chase Championship. It will be PIR where the ESPN team should be able to show everything they have learned this season about presenting a race in a form that fans embrace.

This post will host your comments about the coverage of the Sprint Cup Series from PIR on ABC. To add your TV-related opinion, just click on the comments button below. This is a family-friendly website, please keep that in mind when posting. Thanks for taking the time to stop by.

Thanks to Max Papis for the great shot of PIR and Rattlesnake Mountain.
Posted by Daly Planet Editor at 2:00 PM 341 comments: