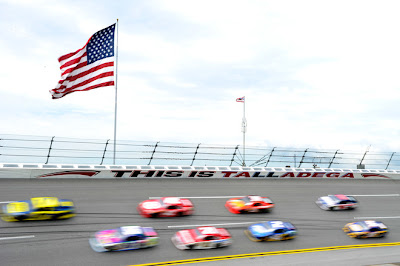 What a surprise when after another amateurish pre-race show, the live race coverage from the NASCAR on FOX gang appeared to be significantly changed.

The pre-race featured the Waltrip brothers again trying to top each other and the results were not pretty. Jeff Hammond dusted off Mr. Pizzi for a tasteless look at the infield happenings. While the pit reporters appeared, the spotlight once again was on the Waltrips and lots of conversation. A delay in the start of the race due to rain only made it seem worse.

After all the recent controversy between Darrell Waltrip and the fans, it was interesting to see him hosting a pre-race feature that recapped the biggest Talladega wrecks from the past. FOX once again sold accidents as the appeal of Talladega.

This Sunday, the pictures being shown to the fans at home were completely different. Gone were the two-car tightshots and instead the entire field was featured on-camera consistently. Also gone were the single views of pit reporters, green flag pitstops and Jeff Hammond's feature reports.

The director used a split-screen continually during the race for a wide variety of content and it was a welcome change. The integrity of the green flag racing was made important once again. The only drawback was the music and the recorded "bumpers" of drivers shown going to commercial under green.

Looking much more like a truck series race on SPEED, the FOX presentation from Talladega gave race fans a preview of just what the sport would look like when the best racing on the track was made the center of the telecast. It was a refreshing treat.

FOX continues to have outstanding pit reporters, but the mix upstairs is still dominated by Waltrip. Joy is simply not allowed to call continuous laps of the race as a play-by-play announcer and that is a shame. He can bring excitement to a telecast in an instant.

Late in the race, FOX began the side-by-side commercials. There were a lot of them. Even with the ability to see the field, the frustration of late commercials after a long day and rain delay was felt in fan comments.

The mess that resulted featured FOX missing a Kurt Busch spin, but rebounding with the correct replays. The green-white-checkered finish was anti-climactic but FOX used the correct wideshot camera and showed the lead lap cars all racing to the finish. A super slo-mo replay was a bonus.

The directing of this coverage was radically different than what we have seen this season from FOX. Whether it is a shift in philosophy or just a practical matter of covering restrictor plate racing is yet to be seen. Either way, it made for a day of solid pictures from start to finish.

We welcome your comments on the NASCAR on FOX coverage of the Sprint Cup Series race from Talladega.
Posted by Daly Planet Editor at 7:00 AM 72 comments: